In Egypt, a fight for women’s justice 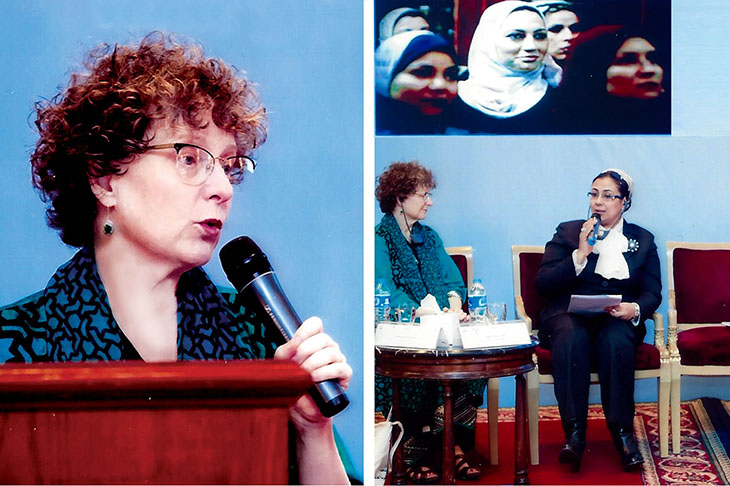 Political science professor Sally Kenney discusses the importance of female judges in the pursuit of justice for women at a United Nations Women conference in Cairo. (Photos from Newcomb College Institute)

When summoned to travel to Cairo, Egypt, to participate in a United Nations Women conference to support the Egyptian government in developing anti-discrimination policies and strategies for women, Sally J. Kenney, executive director of Newcomb College Institute and professor of political science, knew she had to go. Her scholarship examines women’s representation in the judiciary, and Egypt seemed poised to make a great leap forward, having appointed its first woman judge in 2003. Today only about 80 Egyptian judges out of 12,000 are women, and all serve at the lowest levels.

At the conference Kenney spoke on “Why Women in the Judiciary Really Matter?,” examining “the obstacles to women’s full and equal participation in the judiciary as well as the role of the judiciary in the protection of women’s rights.”

In Egypt, women make up half of all law school graduates and have worked as lawyers since the 1930s. Popular opinion, however, among men and women, runs against having women serve. Eighty-eight percent of the judges themselves recently voted to exclude women from the judiciary, despite an explicit mandate against discrimination in the 2014 Constitution. At the opening session of the conference, the head of the Supreme Judicial Council dramatically announced that the judges had been wrong to do so.

“It was impossible ... not [to] admire the enthusiasm, organization, and determination of the Egyptian women judges, parliamentarians, NGOs, and activists.”

“It was impossible to be present and not admire the enthusiasm, organization, and determination of the Egyptian women judges, parliamentarians, NGOs (nongovernmental organization) and activists. They had studied the various possibilities for an equality commission carefully, drawing on the experience of other Arab countries,” Kenney said.

Popular support for the Muslim Brotherhood, high rates of illiteracy, worsening economic indicators and threats to tourism from violence all bode ill for the future of women’s rights in Egypt. “I sincerely hope that the latest Egyptian revolution will at last include women in the judiciary and that Egypt will move forward toward the rule of law, freedom of speech and human rights, despite many troubling indicators to the contrary,” Kenney added.