|
New Wave staff newwave@tulane.edu
Print to PDF
After spending two years researching the Egyptian artifacts that reside at Tulane University, Melinda Nelson-Hurst will present her findings on Tuesday (June 17) at a talk co-sponsored by the Louisiana Interest Group of the American Research Center in Egypt and the Louisiana Art and Science Museum. 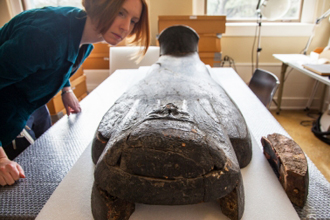 She will speak on “Digging in Museums &amp; Archives: Unearthing Tulane University"s Egyptian Collection” at the Louisiana Art and Science Museum, 100 S. River Road in Baton Rouge, La. Doors open at 5:30 p.m., and the talk starts at 6 p.m.

The Tulane collection of Egyptian artifacts includes two mummies that were publicly unwrapped in the 1850s and have resided at the university for more than a century. Nelson-Hurst has worked to uncover more details about the items. She and Verano also have a research paper on the topic due to publish later this summer, she said.

Nelson-Hurst"s interests lie in the social history and archaeology of ancient Egypt. She has worked most extensively on families and their influence within the state administration during the period of the Middle Kingdom. For more on Nelson-Hurst"s research interests and publications, visit her Web page on academia.edu or her blog.