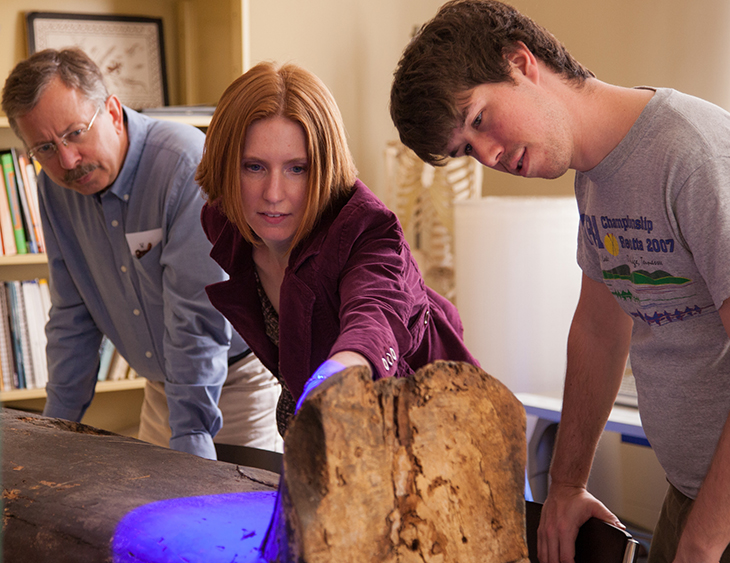 Anthropology professor John Verano, left, Egyptologist Melinda Nelson-Hurst, center, and graduate student Daniel Sullivan use a special light to enhance decorations on one of the ancient coffins in the Tulane collection. (Photo by Rene Guitart for the Middle American Research Institute)

Answers don"t come easily when the mystery is 3,000 years old. Egyptologist Melinda Nelson-Hurst has spent two years researching the Egyptian artifacts that have resided at Tulane University since 1852. Her work is yielding surprising details about two mummies, two intact coffins and funerary materials that reside in Dinwiddie Hall.

&#x201c;I&#39;m amazed at the amount of detail I&#39;ve been able to find&#x201d; about Djed-Thoth-iu-ef-ankh, one of two Egyptian mummies in the Tulane collection. -- Melinda Nelson-Hurst

Nelson-Hurst, a research associate in the Department of Anthropology, and professor John Verano have written a scholarly paper on the topic for publication soon.

It was not known if the two coffins and two items identified as funerary masks belonged to the two mummies in the Tulane collection. All the items were donated to Tulane by an associate of George Gliddon, an antiquities collector who staged elaborate public unwrappings of mummies 160 years ago in several cities, including New Orleans.

Interpreting faded inscriptions, Nelson-Hurst determined that one coffin belongs to the male mummy at Tulane, who was 50-plus years old when he died. Djed-Thoth-iu-ef-ankh “was a priest and overseer of craftsmen at one of the most important temples in Egypt,” the Temple of Amun in Thebes.

“I"m amazed at the amount of detail I"ve been able to find about this man,” she says.

She has not been so fortunate with the second mummy, a female whose death at about age 15 remains a mystery, as does her name. At first, the second coffin in the Tulane collection was thought to possibly be hers, but Nelson-Hurst discovered that it belongs to another female mummy named Djed-Mut-iu-es-ankh, who was unwrapped and dissected in Philadelphia by Gliddon. Her skull is in a collection at the University of Pennsylvania"s Penn Museum.

And the two supposed funerary masks are actually part of the cartonnage or innermost mummy cases for the Tulane male mummy and the Philadelphia mummy.

“I"m hoping to create an exhibit on the Egyptian material at Tulane, years down the line,” says Nelson-Hurst, whose research continues. The artifacts are in the collection of the Middle American Research Institute at Tulane.

Coffin lid of Djed-Thoth-iu-ef-ankh, who was a priest and overseer of craftsmen at the Temple of Amun in Thebes. (Photo by Rene Guitart for the Middle American Research Institute)