The Tulane University women's swimming and diving team has been dormant since 2005-06, but the squad added eight new faces in preparation for the program's restart in 2009-10 school year, head coach Lena Guarriello announced. 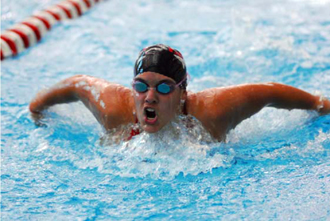 Emily Needham was one of eight high school standouts to sign national letters of intent with the Green Wave to restart the swimming program in 2009-10. (Photo from Tulane athletics)

The team, which first got its feet wet in 2003, had achieved several successes in the three short years of its existence, including winning the 2005 Conference USA Championship in just its second season. Prior to 2003, Tulane fielded a women's swimming and diving program from 1977-90, although it was not fully funded.

“This recruiting class is the best that Tulane swimming has ever seen,” Guarriello said. “These young women have a tremendous amount of courage in that they are taking a chance on starting a new program in a redeveloping city. As a team, they are going to have an immediate impact at the conference level. I'm excited to have such a great group of swimmers revive our swimming and diving program.”

Alf-Huynh joins the Tulane family after a standout prep career. She twice was named team MVP and was named All-American as a sophomore. Alf-Huynh, who won the district title in the 100 back in 2008 and the state 100 backstroke title in 2007, finished in the Oregon High School State Top 6 on six occasions. In addition to her performance in the pool, she has held at least a 3.5 GPA every semester in high school.

Cunningham was a state qualifier in the 200 medley relay, 200 free relay, 200 individual medley and 100 backstroke in 2008. She is a USA National qualifier in the 200 individual medley, claiming All-America honors in the 200 medley relay from 2005-07 and the 200 IM in 2008. In addition, Cunningham claimed Illinois State Scholar Athlete honors in each of the last three seasons.

Davis was captain of her high school team and finished fourth overall in the 100 fly at the Florida High School championship in 2008.

Harris signed with Tulane following a marquee high school career. A National Interscholastic Swim Coaches Association All-American in the 400 free relay in 2007, Harris is a three-time all-state honoree in the 100 free, two-time all-state honoree in the 200 free and claimed state medalist recognition in relays on seven occasions. She also earned USA Swimming Scholastic All-America honors in each of the last two seasons.

Needham is a two-time YMCA All-America, nine-time YMCA Olympic Qualifier, and was the YMCA New England Champion in the 100 fly in 2008. Needham was also a Speedo Sectional Qualifier and a New England Swimming Top 10 swimmer in the 100 and 200 fly.

Pfohl is a U.S. National qualifier and also qualified for the Spring Senior Nationals, while Tarka is a four-year varsity letterwinner who earned NISCA All-America honors in the 100 fly in 2007 and the 200 IM in 2008.