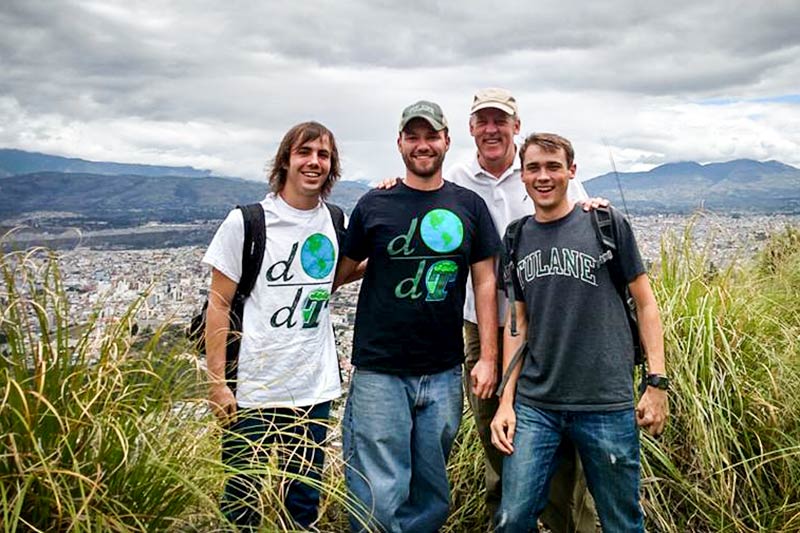 There’s a reason: The town of 2,400 tripled in population between 2000 and 2016, but the water distribution supply has not kept pace.

Enter the Tulane University chapter of Engineers Without Borders, which connects undergraduates with developing nations in need of engineering skills that it otherwise could not afford.

“Engineers Without Borders allows students to participate in community-driven development programs worldwide through the design and implementation of sustainable engineering projects.”

Under the guidance of physics professor Douglas Chrisey and Tulane alumnus and adjunct professor Brad Moore, the group recently traveled to Laquigo to study the problems up close. That meant meeting with village leaders, and trekking up mountains and through jungles to get a clearer picture of how water makes its way from town to town.

One thing they discovered is that Laquigo is the last village using a shared pipe system among many other towns. “This leaves them at the mercy of the other villages upstream,” said Tulane engineering student Max Woody. “When those upstream need more water, Laquigo gets less and less.”

The group’s challenge – to increase the water supply to Laquigo while making sure Laquigo’s access to water cannot be cut off by other villages.

They spent the rest of their trip taking water samples and discussing with village leaders issues such as ownership rights of the existing system and the process used by the government to award water to different groups. Back at Tulane, they are working on plans to build a reliable, independent water system for Laquigo residents.

Chrisey said the group needs donations to help with travel, materials and equipment expenses and soliciting ideas from experts who might be interested in joining the cause.

“Every day, millions of people struggle worldwide with the basic tasks of life,” Chrisey said. “Engineers Without Borders allows students to participate in community-driven development programs worldwide through the design and implementation of sustainable engineering projects, while fostering responsible leadership.”