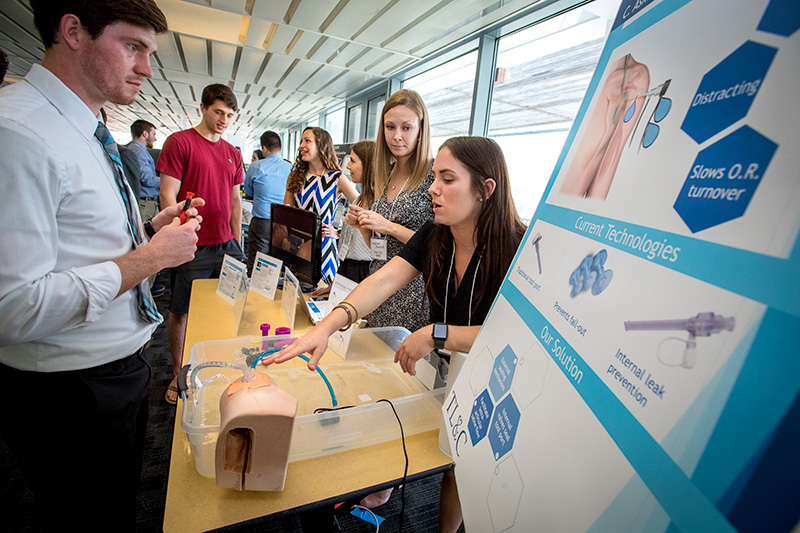 J.J. Libler, far left, listens as Carly Askinas, right, explains the benefits of a closed-system arthroscopic cannula during the 2018 Engineering Design Expo in the Qatar Ballroom. The instrument, which helps maintain operating room safety and sanitation during arthroscopic surgery by preventing cannula leakage, was by developed by the Tendon Love and Care team, pictured left to right, Erika Chelales, Emma Bortz, Madison Vanosdoll and Askinas. (Photo by Paula Burch-Celentano)

They called their project TU Wheelies, and Tulane University biomedical engineering seniors beamed when they were invited to explain their invention.

“The idea is to reduce the constraints that motorized wheelchair users face when traveling over uneven surfaces,” said Dana Kaplan, who teamed up on the project with fellow seniors Laquel Brown and Catherine Starks.

The product features tire attachments for use on surfaces such as grass, gravel or sand as well as a latching mechanism to facilitate the attaching process.

“Students take what they have learned in the classroom over four years, and use that to develop real-world applications. It was terrific.”

—Michael Herman, interim dean of the School of Science and Engineering

Team TU Wheelies showed off its creation at the 2018 Tulane Engineering Design Expo Wednesday, April 18, at the Lavin-Bernick Center for University Life.

More than 40 teams of engineering and computer science students presented projects at the Expo, impressing fellow students, faculty, industry representatives and Michael Herman, interim dean of the School of Science and Engineering.

“The Expo showcases the capstone projects of SSE's engineering seniors,” he said. “They take what they have learned in the classroom over four years, and use that to develop real-world applications.  It was terrific.”

Projects included an arthroscopic cannula to help orthopedic surgeons maintain safety and sanitation during surgery by preventing cannula leakage, an iOS application designed to recommend outfits to users based on a given article clothing, and a web-based Worldwide Threat Tracker that uses an interactive map interface to display threat data around the globe.

The Expo was sponsored by Schlumberger, the world’s largest oilfield services company. Projects were supported, in part, by the National Institutes of Health. 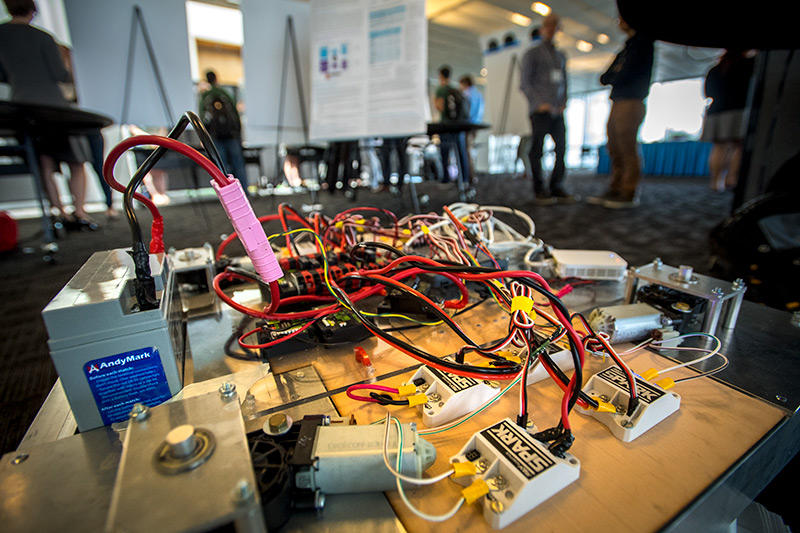 A home-made drive-train and chassis sits on the floor of the Qatar Ballroom during the 2018 Engineering Design Expo. Developed by Casey Kotowski, Theadore Steffens and Tommy Yang, all seniors majoring in engineering physics, the device, operated by a console controller, uses swerve modules to provide 360 degrees of motion to increase mobility for FIRST Robotics Competition robots. (Photo by Paula Burch-Celentano)