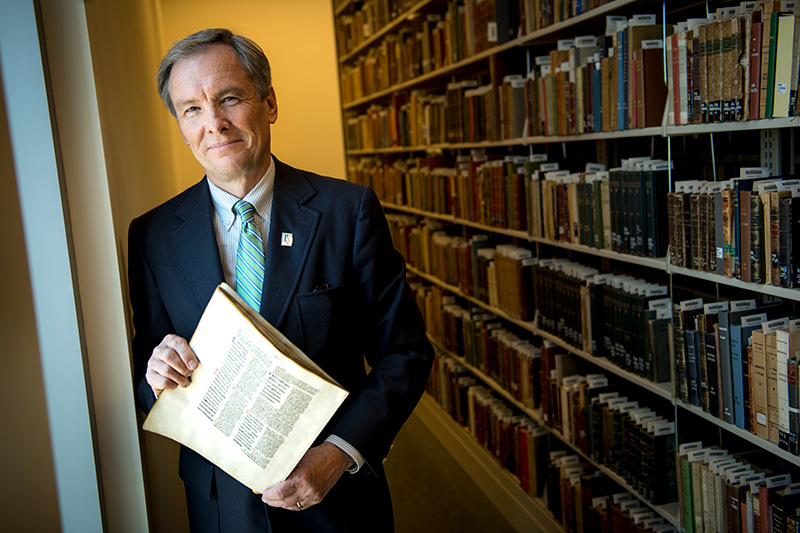 Michael Kuczynski is newly inducted into the Grolier Club, a New York-based international book lovers’ society. His scholarship in medieval literature and outreach to high school students made him a candidate for admission into the club. (Photograph by Paula Burch-Celentano)

In May, Michael Kuczynski, a professor of English in Tulane University’s School of Liberal Arts, was inducted into the Grolier Club, an international society of bibliophiles and scholars.

Kuczynski, the first Tulane faculty member to join the prestigious society, was nominated by a fellow member, Stuart Rose, a Tulane parent and book collector.

“It’s a great honor not just for me individually but for Tulane as an institution,” said Kuczynski. “It’s a very eclectic group of people.”

“Books provide us with a window on the global history of learning.”

The club is based in New York City but has 800 international members: people who buy and sell books, librarians, academics and other book lovers.

The Grolier Club network, exhibit space and reference library will benefit Kuczynski’s research as a medievalist, said Kuczynski, who looks forward to “promoting some of our campus book history resources, such as holdings at Howard-Tilton and the Amistad Research Center.”

The club was founded in 1884 "to foster the study, collecting, and appreciation of books and works on paper, their art, history, production and commerce.” The club takes its name from Jean Grolier, a 16th-century French book collector and patron of an Italian press.

Is book culture old-fashioned in a society that’s overrun by screens? Kuczynski is confident not only that books will remain part of the educational environment, but also that book history will continue to be an important field of study.

“A lot of so-called modern concepts in education that we think we’ve invented, like design thinking and social entrepreneurship, are in fact aspects of the history of manuscript and early print culture,” said Kuczynski. He explained that medieval texts such as the Bible were living works that needed active, ongoing interpretation by scholars and readers, who created a lively market for beautiful and useful books.

“That’s the importance of book culture. Books provide us with a window on the global history of learning, and you can’t get that from a computer.”