The continued revival of New Orleans depends on its entrepreneurs, says Tulane MBA student Will Donaldson, so the organization he leads  the Tulane Entrepreneurs Association  is hosting three events to teach students the mechanics of starting a business and connect them with the city's entrepreneurial network. 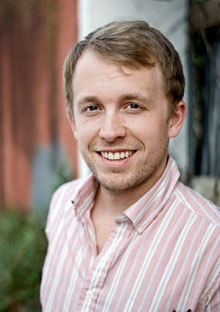 “Entrepreneurship is central to the revival of New Orleans,” says Will Donaldson, president of the Tulane Entrepreneurs Association, who is a Tulane MBA student.

Some of the city's most influential business leaders will participate as the association celebrates the Global Entrepreneurship Week, an initiative coordinated throughout nearly 80 countries to inspire young people to embrace innovation, imagination and creativity.

The centerpiece event at Tulane is a panel on “The New New Orleans: Opportunities for Entrepreneurship” on Monday (Nov. 24) at 5 p.m. in the Lavin-Bernick Center on the uptown campus. The event is free and open to the public.

It will feature Stephen Moret, state secretary of economic development, who will address students on the future of opportunity in Louisiana.

“Entrepreneurship is central to the revival of New Orleans,” says Will Donaldson, president of the Tulane Entrepreneurs Association. “Our students want to be involved in a meaningful way.”

Post-Katrina New Orleans has become a hotbed for entrepreneurship. The panelists will discuss areas of industry poised for growth. They also will share lessons from their own experiences in the city.

In addition, the organization will host a social entrepreneurs workshop on Friday (Nov. 21) for members of the community to meet and learn from experts in this budding field. Social entrepreneurs use innovative solutions from the business world to make a difference in their communities. Pre-registration is required to attend the function and organizers have signed up their limit of 60 participants.

The week's events will close with a lecture from bio-tech entrepreneur Dale Pfost, who will speak about raising investment capital for bio-tech ventures. This event is scheduled on Tuesday (Nov. 25) at 4 p.m. in room 111A of the J. Bennett Johnston Building, 1324 Tulane Ave., part of the Tulane downtown New Orleans campus.

The Tulane Entrepreneurs Association is a student organization at the A. B. Freeman School of Business. Its objective is to teach the fundamentals of starting a business and to promote entrepreneurship in the community.