The Rev. Val McInnes traveled from the Tulane campus to London recently for a royal visit with a purpose  to award the 2008 St. Thomas Aquinas Environmental Award from Tulane to the Prince of Wales. 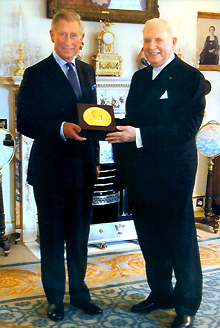 In a London ceremony, the Prince of Wales, left, receives the St. Thomas Aquinas Environmental Award for 2008 from the Rev. Val McInnes.

At a private ceremony held at Clarence House in London on Sept. 10, Prince Charles received the award from McInnes, who holds the Chair of Judeo-Christian Studies at Tulane.

It was the second year for the award, which went in 2007 to Sir John Houghton, a leading physicist and pioneer in climatology.

McInnes cited the prince for “his leadership in providing principles of sustainable agriculture, stewardship of water resources and land and a spiritual renaissance of the sense of the sacred.”

Because of the growing concerns over climate change in recent years, the Chair of Judeo-Christian Studies began bestowing the St. Thomas Aquinas Environmental Award on distinguished men and women who have raised the level of environmental awareness.

The award is named in honor of Aquinas, the celebrated Dominican philosopher, theologian and saint.

In his major work, The Summa Theologicae, Aquinas sketched an entreaty for environmental responsibility, stating that as creatures made in the image and likeness of God, we are stewards of the world in which we live, McInnes said.

“In reclaiming this remarkable mandate of the sacred, Your Royal Highness points the way to the renewal of the Judeo-Christian traditions, the continued improvement of our environment and handing it on secure for the next generation,” McInnes said in presenting the award to the prince.