Essential advice for living with water 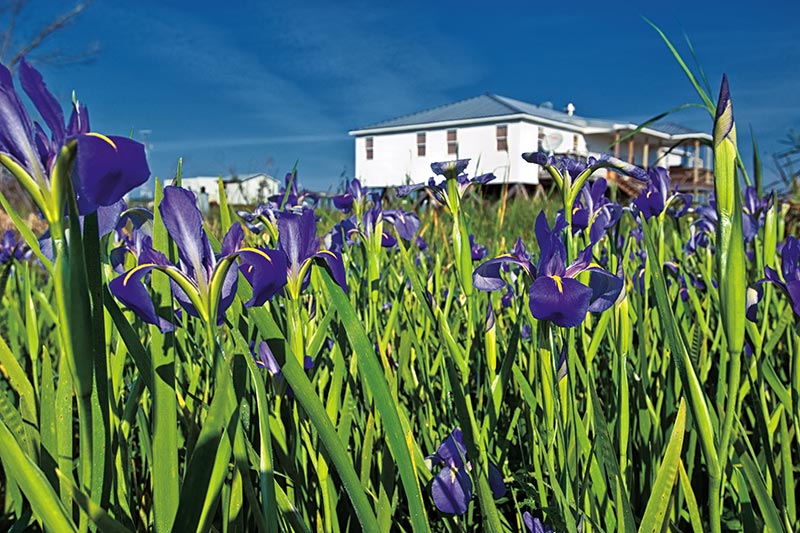 Irises surround a house built on stilts in low-lying Pilottown, Plaquemines Parish, on the Louisiana coast. (Photo by Jackson Hill)

The rhythms and resources of water define Louisiana and New Orleans. Even our sense of direction comes from the Mississippi River and Lake Pontchartrain. Who knows where north and south, east and west are? It’s the lake or river side of streets by which we pinpoint our way.

But water is also often hidden in New Orleans, pumped out as fast as possible after a storm. It’s visible only at the lakefront or on the riverbank and in the ribbon of Bayou St. John.

The threat of a flood of water often scares New Orleanians. But to survive and prosper we need to embrace the promise of water while recognizing and managing the perils it presents.

“The entire coast, including everything that New Orleans sits on, was built by the Mississippi River,” said Mark Davis, senior research fellow at Tulane Law School and director of the Tulane Institute on Water Resources Law & Policy. “And the land was largely built during times of high water when the river would leave its channel, spread out over the shallow waters and the lowlands. And it would start dropping out sediment, sand and silt.”

For a hundred years now, we’ve walled the river away behind levees—and we’ve enshrined this protection in law and policy, said Davis.

But now maybe it’s time to rebalance our use of water.

DUTCH DIALOGUES
After Hurricane Katrina, John Klingman, Favrot Professor of Architecture, became part of a group that connected with consultants from the Netherlands who offered their expertise on how to live with water. The Dutch, after all, have been living harmoniously with lots of water for thousands of years.

Ironically, in the early 1900s Dutch engineers had come to New Orleans to learn about the Wood Screw Pump designed by A. Baldwin Wood, who graduated from Tulane with a Bachelor of Science in Engineering in 1899.

This story originally appeared in the December 2016 issue of Tulane magazine.