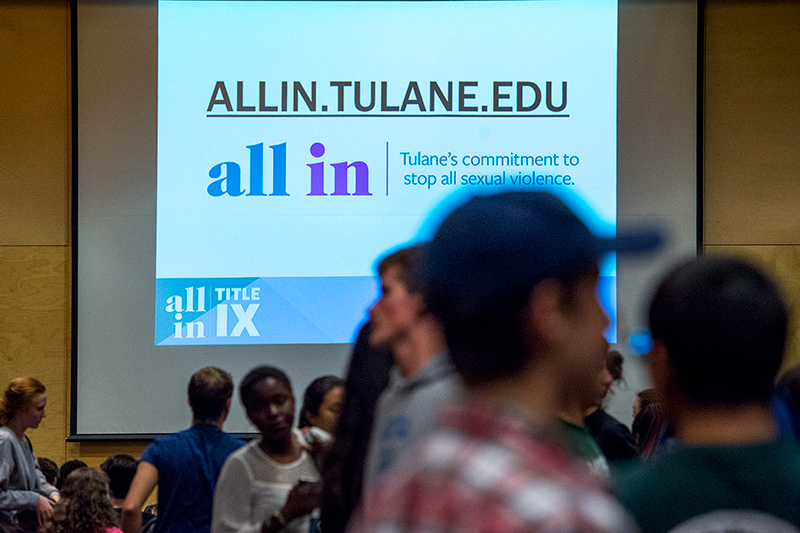 Students file in to the Shifting the Paradigm event in the Lavin-Bernick Center Tuesday, Oct. 9. (Photo by Paula Burch-Celentano)

During the fourth annual Shifting the Paradigm event held Tuesday evening on the uptown campus, the Tulane community received an update on the university’s efforts to end sexual violence on campus.

In addition to a detailed account of how many cases had been reported over the last year, Title IX coordinator Meredith Smith offered insight into how the university addresses the individuals behind each case.

“When I look up these numbers in our database, the database pulls up pictures,” said Smith, standing before a PowerPoint slide with the numbers of reported sexual assault, stalking, domestic violence and sexual harassment cases at Tulane. “Every one of these numbers we’ll talk about tonight has a name. So, I want to be gentle with how we talk about this.”

The audience, composed mostly of students, was talked through the reporting process and offered definitions for related terminology including Title IX and the Clery Act.

Among the numbers presented were those from the last academic school year which included reports of sexual misconduct between July 1, 2017 and June 30, 2018. In instances of victimization for 2017-18, the number was higher than the previous year. Smith credited this increase to students’ growing willingness to come forward to report such acts.

Increased reports of stalking, she said, were the primary reason for the overall increase in reporting for last academic year.

Tulane President Mike Fitts opened the event with a reminder of how the results of the Climate Survey results announced in January caused university administrators to take a hard look at what was being done and what more could be done to change the culture on Tulane’s campus.

“Our eyes have been permanently opened to the reality of this problem and today, it remains far from being solved,” he said. “Sadly, there’s no clear solution to stopping sexual violence and our own data proved that what we thought to be the best practices were not enough.”

Felicia McGinty, executive vice chancellor of administration and planning at Rutgers University gave the keynote address. McGinty has been a part of the planning of new initiatives at Tulane and serves as a member of the president’s task force charged with reforming the university’s policies.

Her message: Be ok with the cost of activism.

“You may lose some friends. Your girlfriends in your sorority may shade you,” she said. “But be the person that creates change and stands on your principles. That’s the way you shift a paradigm.”