Every Child Deserves a Good School 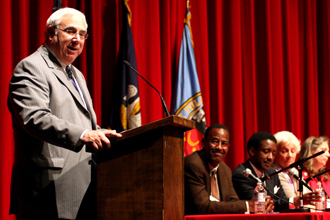 Paul Pastorek, superintendent of education for the state of Louisiana, was the keynote speaker.

He said, "Our mission is to increase academic achievement for all and to eliminate the achievement gap between the races and between classes. We must prepare our students to be effective citizens in a global marketplace."

Since Hurricane Katrina upended the Orleans Parish school system in 2005, a major school rebuilding effort has been under way.

Forum participants, representing different areas of education reform, discussed what has worked and what has failed during the past three years.

One area of concern discussed at the forum is tension among various school boards and systems. Participants expressed concern that conflict between groups may be detrimental to education.

"It's not about Orleans Parish Schools or the Recovery School District: it's about every child in New Orleans," said Charlotte Matthew, principal of Benjamin Franklin Elementary School. "We need to take our barriers down and see just how we're going to make a difference in the classroom." 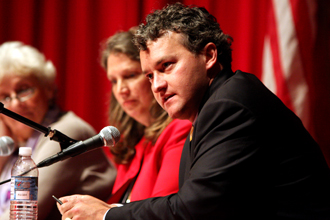 Matt Candler, chief executive officer of New Schools for New Orleans, participates in the forum on public education. The mission of New Schools, a nonprofit organization, is excellence in public schools to benefit every child in New Orleans.

In response to the idea of combining the different governing bodies currently heading the schools, the former principal of the New Orleans Charter Science and Mathematics High School Barbara MacPhee said, "We cannot go back to that. I like the fact that there are three systems."

MacPhee added that it is beneficial to the students that there are a number of people who provide educational services in the city.

Tulane University President Scott Cowen moderated the forum after delivering brief opening remarks. Cowen noted that he is the product of a public school system. He also reminded the audience of how far New Orleans schools have come since 2006.

"The No. 1 priority for our citybeyond our physical safetyis public education," said Cowen. "If we get that right, the potential for this city is unlimited about where it can be in the 21st century. If we do not get it right, we will revert back to the issues that we had before the storm."