Chemical and biomolecular engineering professor Vijay John was honored during a ceremony at the Lavin-Bernick Center as this year's School of Science and Engineering Outstanding Researcher on April 8. 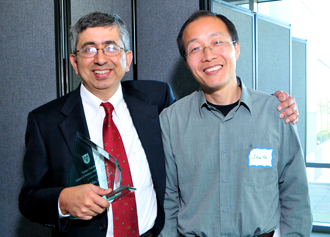 Vijay John (left), the Leo S. Weil Professor of Engineering, shares his excitement at receiving the Outstanding Researcher Award with Jibao He, electron microscopy lab supervisor, at the School of Science and Engineering Research Day on April 8. (Photo by Tracie Morris Schaefer)

He presented a lecture on his research in environmental remediation, targeted drug delivery, and new technologies in automotive catalysts and energy storage.

"All of the things we associate with an outstanding researcher," said Gary McPherson, senior associate dean for research, "Vijay does all of them well."

John's research with his graduating doctoral student Jingjing Zhan resulted in a start-up company specializing in remediation of environmental pollutants.

They developed environmentally safe carbon and iron nanoparticles designed to travel in water and sediment, and eventually sink deep down to the bedrock of the earth. Once they reach their target, these "scavengers" then act like a parachute, which settles on top of the contaminants and breaks them down.

In the drug-delivery area, John is working in collaboration with researchers at the Tulane School of Medicine to develop liposomes that will carry drugs and vaccines directly to targeted cells.

The challenge is to develop chemicals to put on the carriers that will be attracted to and attach to the desired cells, and also be camouflaged against the immune system so they are not seen as foreign substances that need to be destroyed.

John said his goal in mentoring graduate students is to guide them to the point where they begin to craft their own ideas, "generating new knowledge."

"That's where the excitement comes in research," John said. "It's when you know that what you're seeing and what you're thinking is something that nobody in the history of mankind has seen before or thought before."

John joined Tulane in 1982 and he has served as chair of the Department of Chemical and Biomolecular Engineering since 2002.

Belinda Lacoste is a student studying journalism in the School of Continuing Studies and a staff member who writes for the School of Science and Engineering.