Exhibit to Focus on Hurricane and its Impact

A water-damaged piano that belonged to New Orleans-born rock and roll musician Fats Domino and computer simulations of hurricanes are just part of an exhibit being developed by the Tulane/Xavier Center for Bioenvironmental Research and the Louisiana State Museum. Slated for opening in 2010, the multi-room showcase will offer an educational tour of the environmental causes and effects of Hurricane Katrina and its landfall, as well as lessons for recovery. 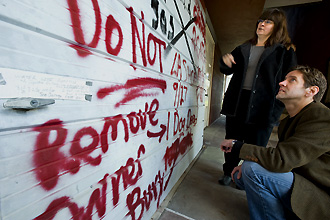 Exhibit planners Douglas Meffert and Karen Leathem examine a garage door that was removed from a Mid-city home for a Hurricane Katrina-related exhibit. (Photo by Paula Burch-Celentano)

“We'd talked about having the opening on the exact fifth anniversary of Katrina,” says Douglas Meffert, deputy director of the research center, “but one thing we've learned from Katrina, Gustav and Ike is to not plan big galas in late August.”

Drawing from information gathered about the impact on New Orleans and coastal Louisiana before, during and after Katrina, the exhibit, tentatively titled “Hurricane! Katrina and Beyond,” will provide a wide array of information.

“Our objective is for this to be a place where school teachers can take their students to learn about hurricanes and how they work, climate change and sustainable architecture,” says Meffert. “The presentation will act as a teaching tool for both locals and visitors to New Orleans.”

Visitors to the exhibit will tour the stages of the storm's formation, growth, landfall and aftermath. After learning about the historical vulnerability of the area's coastal wetlands and levees, guests will enter what Meffert believes will be among the most popular rooms in the exhibit.

“There will be a display that suggests what it would have been like to be in the middle of the storm, perhaps trapped in the attic with the water rising,” says Meffert, who describes the room as having looping video of news reports, and other multimedia effects including the sound of howling wind.

In another area of the exhibit, visitors will revisit the Katrina experience from a national perspective and, in another room, be given a primer on storm surges and reasons why the levees failed. The final room will focus on lessons learned from the storm and will offer information on sustainable redevelopment, an overview of the integrity of levees and other national infrastructure, as well an examination of how new modalities of civic engagement are evolving in neighborhoods that are rebuilding.

Scientific research for the exhibit is being conducted by the Center for Bioenvironmental Research with help from the University of Rhode Island Graduate School of Oceanography, Meffert says. Historical research is being led by Louisiana State Museum historian Karen Leathem.

“The museum is collecting oral histories as well as accumulating artifacts from Katrina,” says Meffert. Along with Fats Domino's piano, the exhibit will display Elton Mabry's “wall diary.” Mabry, a resident of a now-demolished public housing development, gained national attention for the journal he kept by writing on the walls of his apartment during several weeks following the storm.

The project is being funded through several grants, including a $1.4 million from the National Science Foundation's Informal Science Program. According to Meffert, the full exhibit will cost between $4 and $5 million. While the total fundraising goal has not yet been reached, the NSF grant gave the Louisiana Museum Foundation enough funds to ramp up its capital campaign for the exhibit.