Discussing the ways in which laws governing business transactions can improve lives in sub-Saharan Africa, Claire Moore Dickerson addressed a Tulane Law School audience on Friday (March13) as she was honored as the first holder of the new John B. Breaux Chair in Business Law. 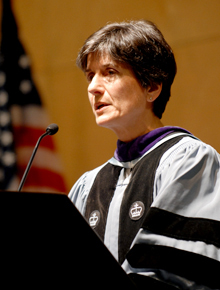 Claire Moore Dickerson is invested as holder of the first John B. Breaux Chair in Business Law at a Tulane Law School ceremony on Friday (March 13). The chair is named in honor of the former U.S. senator. (Photo by Tracie Morris Schaefer)

With Breaux, a former U.S. senator from Louisiana, on hand at the investiture ceremony for the chair named in his honor, Dickerson discussed her research and the powerful parallels that can be drawn between segments of the African economy operating outside of the law and the U.S. economy's current profound correction.

She predicted that in the United States, “New statutes will continue a move toward centralization, until we get right the protective aspects of our business laws.”

Dickerson's expertise in business associations, contracts, comparative law and international business transactions have led her to investigate the effects of business law on the informal sector in sub-Saharan Africa. She has earned international recognition for her teaching and research on commerce and human rights.

Anonymous donors endowed the chair that bears Breaux's name with a $1.5 million gift in honor of his distinguished career in public service. Breaux served Louisiana for 33 years as a member of the U.S. House of Representatives and the U.S. Senate. He continues to serve as an advocate on behalf of the citizens of his home state.

At the ceremony in the Lavin-Bernick Center, Larry Ponoroff, dean of the law school, expressed gratitude to the donors, pointing out that the transformative gift came in the days following Hurricane Katrina, when the university's future seemed uncertain. Tulane received matching funds for the Breaux chair from the State of Louisiana Board of Regents in 2008. The chair will support in perpetuity a nationally renowned scholar in the joint master of business administration and juris doctor program.

Tulane President Scott Cowen presented Breaux with a resolution from the Board of Tulane to mark the occasion, saying, “You can always tell the character of an institution by those that they honor. We are pleased to have your name associated forever with Tulane University; your distinguished career speaks for itself.”

In accepting the resolution, Breaux praised Tulane for its work in the community. “Great universities are comprised of great people. â¦ Tulane Law School is a leader in teaching their graduates about giving back.”

Melissa Erekson is assistant director for writing in the Office of Development Research and Writing.