The traditional, written history of New Orleans has been based primarily upon stories told by explorers, governmental officials, lawyers and businessmen. Emily Clark, associate professor of history at Tulane, is changing the commonplace understanding of history by exploring voices that have not before been widely heard. And in the process, she is revealing a more complex and multifaceted early American history. 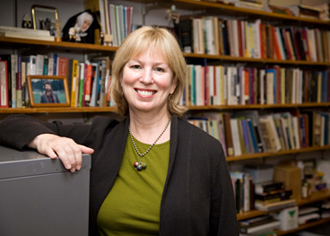 Emily Clark, an associate professor of history at Tulane, has published two books about the Ursuline nuns who founded a convent in New Orleans. Now she is working on a book about quadroons  New Orleanians of mixed race. (Photos by George Long)

Clark has examined a group of French and colonial religious women who established the first convent in the Louisiana territory and the community of Ursuline nuns in New Orleans in 1727, and have served the city ever since.

Although the civic leaders of colonial Louisiana primarily recruited the first Ursuline missionaries for the purpose of nursing the sick, the feisty women had another mission: they wanted to be educators. They established a school to educate free girls regardless of their social rank and race, and they began a program of Catholic conversion among slaves and Indians.

In two books, Masterless Mistresses and Voices From an Early American Convent, both published in 2007, Clark pays tribute to the nuns whose work promoted a novel level of literacy among women in colonial America and eventually led to the development of a large, vibrant Afro-Catholic population in New Orleans.

“Their catechesis of enslaved women was very successful in the first generation,” Clark says. “Then in the second generation, the men caught up with the women [in Catholic observance]. I postulate that women began to insist on Catholic conversion before marriage. This changed the fabric of the city.” 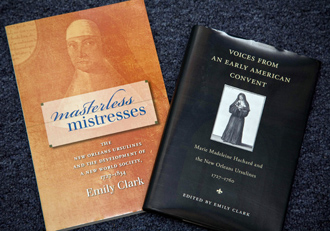 Clark's books on the Ursuline nuns portray colonial Louisiana women. Her research interests include early America and the Atlantic World, particularly colonial and early history of the Lower Mississippi Valley.

In Voices From an Early American Convent, Clark provides firsthand accounts of the French missionaries who braved the threat of pirates, possible shipwreck and shortage of food and potable water on the long voyage to Louisiana, believing that they would be seeking to convert Native American Indians in the New World.

She focuses particularly on Marie Madeleine Hachard, the youngest of the 12 women who founded the New Orleans convent.

“Little did they know that they'd be catechizing enslaved women and children, that this would be the spiritual vineyard in which they'd be working, with no previous experience with slaves of African descent,” Clark says.

Clark's books uncover life in early colonial Louisiana from the women's perspectives as she presents domestic details often overlooked by male writers of the time.

Clark is next turning her attention to quadroons  New Orleanians of mixed race. Poring over records of marriages between people of African descent, she is contesting the myth of the “tragic mulatta,” who has been portrayed in travel writing, literature and art. By scrutinizing historical documents in order to detect patterns that will reveal truth about the real women behind the myth, Clark hopes to give voice to married women of color in antebellum New Orleans.