The Eyes Have It

More than 50 patients diagnosed with glaucoma have benefited from a new procedure at Tulane Medical Center that essentially restores the eye's natural irrigation. Larry Schaeffer, 61, is a New Orleans blues musician who has found relief from glaucoma after the new procedure. 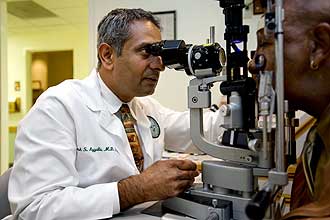 Dr. Ramesh Ayyala, an associate professor of ophthalmology and director of the glaucoma service at Tulane Medical Center, examines the eyes of patient Larry Schaeffer. (Photo by Paula Burch-Celentano)

When Schaeffer first experienced vision problems 20 years ago, a physician prescribed medication for glaucoma, a serious condition that affects more than 3 million Americans. If left untreated, glaucoma can cause irreversible damage to the optic nerve and cause blindness.

“When I used to blink my eye, I would feel the fluid sort of ripple or 'wooze' off my eye,” Schaeffer says of the fluid and pressure buildup. “Dr. Ayyala is the man with the golden hands.”

Canaloplasty utilizes innovative microcatheter technology to widen the main drainage canal around the iris. Fewer than 400 canaloplasty operations have been performed in the United States, and Ayyala says he is the only physician performing the surgery in Louisiana. He compares canaloplasty to an angioplasty for the heart.

“This is probably the best operation designed for glaucoma,” Ayyala says. “Recovery is faster than with previous eye surgeries, and there are fewer complications post-op.”

Schaeffer, a blues harmonica player who once performed with James Cotton, a Grammy Awardâ“winner, had poor peripheral vision and difficulty reading lyrics before the canaloplasty procedure.

Neither medications nor his first surgery in 2002 at the Veterans Administration hospital had helped Schaffer. “There was no difference before or after,” Schaeffer says. His left eye was 65 percent cloudy before surgery; now his vision is 20/20 without glasses.

Glaucoma is known as the “sneak thief of sight,” as it silently steals away vision. It accounts for 18 percent of blindness in the United States. By 2020, it is estimated that 3.6 million Americans will suffer from the condition. Louisiana has particularly high rates among its African Americans and Cajun white populations, Ayyala says.

Ayyala received ophthalmology training at the Royal Liverpool University Hospital System in Great Britain and graduated from the Royal College of Surgeons. He later completed fellowships at the Massachusetts Eye and Ear Infirmary and Boston Medical Center, studying glaucoma and corneal disease. He heads the Tulane ophthalmology residency program.

Schaeffer, a Purple Heart recipient for his service in Vietnam, felt some pain during the surgery. But he says the result was worth the pain. “It makes me feel like I did when I used to have my glasses on  but they're off!”

Schaeffer is like a disciple, wanting to share the blessings of his new sight. After watching Stevie Wonder perform at the New Orleans Jazz and Heritage Festival this year, he suggested to Ayyala, “Maybe you can give him a peep.”