Carnival is in her blood, says Carolyn Barber-Pierre, assistant vice president for multicultural affairs at Tulane, as she prepares to dance for her 22nd year as a key member of the Casa Samba troupe. It takes a gaggle of people to keep the varied Mardi Gras traditions alive, and Barber-Pierre is but one of many people at Tulane playing a part in the festivities. 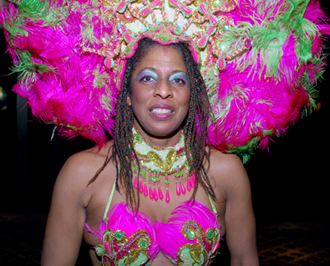 Carolyn Barber-Pierre, assistant vice president for multicultural affairs at Tulane, gets ready to dance for her 22nd year in the Casa Samba troupe. (Photo by Luiz Lima)

She and her husband, Curtis Pierre, are founding members of Casa Samba, a group of drummers and dancers whose performances are inspired by the Brazilian Carnival tradition.

Although she has no Brazilian or Portuguese heritage in her family, Barber-Pierre goes to Brazil at least biannually to soak up the dancing and infectious music.

She and her husband hold practices and classes throughout the year and present workshops and performances about the samba and Brazilian music to children and adults in the New Orleans community.

This year, Casa Samba will perform at several private events during Mardi Gras. Its public appearances include the Zulu Ball in the New Orleans Convention Center today (Feb. 20) and the Endymion Extravaganza at the Louisiana Superdome on Saturday (Feb. 21).

Other Tulane people who are members of Casa Samba are Annie Gibson, a doctoral student in Latin American studies; Patrick Klemawesch, a medical resident; and Monique Labat and Bridget Smith, project managers for the Tulane Center for Public Service.

Tulane sophomore Chloe Palmer is honored to have been selected a maid in the royal court of the Krewe of Carrollton. Her uncle, Houston businessman William H. Taylor III, who has been a krewe member since 1995, asked Palmer to be one of six maids this year since she is a student in New Orleans and could easily participate in the yearlong activities. 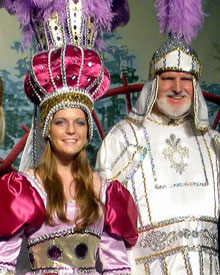 Chloe Palmer, a sophomore at Tulane, is bedazzled by her role as a maid in the court of the Krewe of Carrollton. With her is Jack Daly, a duke in the krewe. (Photo by Tammie Taylor)

“I was awed by it all; it was really amazing,” says Palmer, a sociology major from Spring, Texas. “I had no idea this sort of thing existed. It was such a big event and so much work went into it. It all went off without a hitch  no trouble with the elaborate headdresses.”

Palmer participated in the ball on Feb. 13 at the Hilton Riverside Hotel and viewed the parade on Feb. 15 with her queen and other members of the court in the grandstands at the Intercontinental Hotel on the parade route.

As a royal maid, Palmer learned to curtsy properly and she represented Italy in the krewe's tableau “A Fair to Remember.” The theme commemorated the 125th and 25th anniversaries of World's Fairs in New Orleans.

For Carnival 2010, Palmer plans to be in the Krewe of Carrollton parade as a past maid. She'll enjoy the privilege of riding on a float in the parade with her cousin Ross Grimes, Taylor's stepson, as her escort.

Charlotte Travieso, director of alumni affairs, says she loves participating in the Krewe of Muses parade because of the democratic spirit and community involvement of the all-woman organization.

Travieso has ridden a float in the Muses parade for eight of the nine years of the existence of the krewe that honors the nine muses of Greek mythology. Muses' signature throws are glittery shoes.

“It's such a generous group of women from all walks of life  doctors, nurses, police officers  and they do the right thing,” Travieso says.

Each year the Muses Foundation gives a grant to a worthy organization associated with the parade's featured muse. Last year, the organization took up the banner of Polymnia, the muse of sacred music, and gave a $5,000 grant to Shades of Praise, a gospel choir of which Travieso is a member. 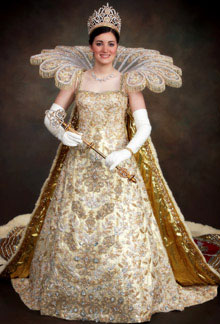 Meg Francez, a first-year student, practices her role as Queen Evangeline in Lafayette, La. She is queen of the Krewe of Gabriel. (Photo by Jay Faugot)

For first-year Tulane student Meg Francez of Lafayette, La., being queen of Mardi Gras in her hometown is something she's wanted since she was 8 years old. Francez, the daughter of Robert Michael and Mary Margaret “Mimi” Francez, is a fourth-generation Carnival royal.

On Fat Tuesday, Francez reigns as Queen Evangeline LXX of the Krewe of Gabriel in Lafayette, home to Louisiana's second-largest Mardi Gras celebration.

The parade's royalty, King Gabriel and Queen Evangeline, pay homage to the hero and heroine of the Henry Wadsworth Longfellow epic poem about displaced Acadians.

Francez will wear the traditional white suit and hat as she toasts King Gabriel in his parade on Mardi Gras morning in Lafayette, where 250,000 people are expected to line the parade route.

To prepare for the evening queen's parade on Lundi Gras (Feb. 23) and the krewe's ball on Mardi Gras, Francez is practicing waving her scepter.

“The whole costume, with the train and adornments, weighs about 75 pounds,” she says. “But I've been practicing walking with weights on the train, so it should be a breeze.”