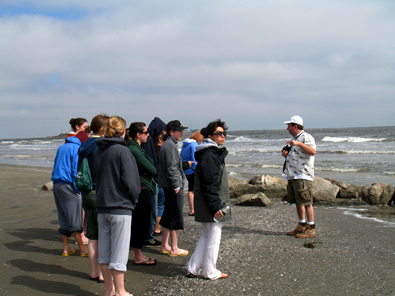 Sadredin “Dean” Moosavi, right, a professor of practice in the Department of Earth and Environmental Sciences, works on a beach erosion project with students at Grand Isle, La., a spit of land on the edge of the Gulf of Mexico. (Photo from Dean Moosavi)

Tulane's community engagement is not limited to students working in the community  faculty members have long worked with the local community to jointly address issues important to both. To assist faculty members in implementing their projects, the Tulane Center for Public Service annually awards funds to support this engagement.

Moosavi, a professor of practice in the Department of Earth and Environmental Sciences, is one of five Tulane University faculty members who received a $4,000 grant from the Center for Public Service.

“The faculty grant will enable us to take the Grand Isle Project in two new directions, both of which will enhance the quality of the science our students are conducting,” Moosavi says.

Moosavi plans to establish a collaboration with Grand Isle High School to enlist, train and equip the teachers and students on the island to perform work in parallel with the Tulane students.

This collaboration will allow data collection to cover far more of the island, a spit of land on the edge of the Gulf of Mexico, Moosavi explains.

“Up to now we have only been able to focus on Grand Isle State Park on the eastern end of the island,” he says.“With the high school's help we can see the whole system while helping to develop the science and inquiry skills of the local island population, the people with the most immediate interest and need to understand what is happening on their island.”

The second component arises from the discovery of old land surfaces containing peat and woody material, including ancient logs, within the beach on Grand Isle.

“We hope to obtain age dates from some of these surfaces as this may allow us to get a long-term, independent measure of the island's rate of subsidence  a true contribution to the science of coastal subsidence in this area,” Moosavi says.

The other faculty members receiving community-based research grants are:

The Tulane Center for Public Service, which administered these grants, is the portal through which community organizations communicate with Tulane and through which the university's resources flow into the community.