Accolades abound for Tulane faculty, staff and students as the 2007â“08 academic year comes to a close. Here is a sampling of some recent accomplishments: 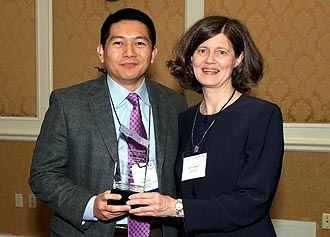 Vincent Ilustre, left, executive director of the Tulane Center for Public Service, receives an award for his contributions to higher education from Marcia McDonald, executive committee member with the Gulf-South Summit on Service Learning and Civic Engagement.

ROBERT BRUCE, emeritus professor in the School of Science and Engineering, received the T. Y. Lin Award from the board of directors of the American Society of Civil Engineers for the most meaningful paper in the field of pre-stressed concrete. Bruce received the award for his work on "Fatigue Endurance of High-Strength Pre-stressed Concrete Bulbâ“Tee Girders," a paper based on research conducted at Tulane under a million-dollar contract from the Louisiana Transportation Research Center. Bruce, principal investigator for the project, will receive a plaque, a certificate and cash prize at the National Bridge Conference in Orlando, Fla., in October.

MICHAEL CUNNINGHAM, associate professor of psychology, was selected as one of the 2008â“09 Duren Professors. Cunningham's Duren course, to be offered in spring 2009, is "New Orleans' Youth: Resilience and Vulnerability in Tomorrow's Leaders."

VINCENT ILUSTRE, executive director of the Tulane Center for Public Service, received the 2008 award for Outstanding Contributions to Service Learning in Higher Education by the Gulf-South Summit on Service Learning and Civic Engagement at a conference held March 13â“15 in Nashville. Ilustre was cited for his work in expanding programming for service learning at Tulane, heading up a Center for Public Service that is widely benchmarked by other universities and for building a dialogue among service-learning practitioners throughout the Gulf South region.

Physics graduate student PETER JACOBSON won the Best Student Presentation Award at the annual users' meeting of the Center for Advanced Microstructures and Devices in Baton Rouge, La., on April 4.

MAUREEN LICHTVELD, professor and chair of the Department of Environmental Health Sciences and Freeport McMoRan Chair of Environmental Policy in the School of Public Health and Tropical Medicine, is the recipient of the 2008 Herbert W. Nickens Award. The award, presented at a meeting of the Intercultural Cancer Council in Washington, D.C., in April, recognizes Lichtveld's efforts in promoting research in cancer prevention benefiting minorities and the medically underserved. The Herbert Nickens Award honors efforts help to bridge the diversity gap in medicine and eliminate health disparities.

MARY "MISSIE" MCGUIRE, assistant vice president for student affairs, was elected to the board of directors of the National Intramural-Recreational Sports Association as region IV vice president. McGuire was elected to a two-year term in April at the association's annual conference in Austin, Texas.

An article by MARY K. OLSON, associate professor of economics, was published in the Journal of Health Economics in March. The article is "The Risk We Bear: The Effects of Review Speed and Industry User Fees on New Drug Safety."

LARRY POWELL, professor of history, has been elected a fellow of the Society of American Historians. Fellows are chosen in recognition of the literary and scholarly distinction of their historical writing.

GREG SOUTHWORTH is the university's new director of emergency response. Southworth comes to Tulane from Shell Oil Co. He has substantial experience in environmental and regulatory engineering, continuous improvement of program performance, team management and directing and recovering from incidents. Following Hurricane Katrina, Southworth served as deputy incident commander for Shell's hurricane response teams for its Gulf of Mexico operations. His first priority at Tulane is completing preparations for the upcoming hurricane season.

A book by RANDY SPARKS, professor and chair of history, was translated into French by French publishers. It is entitled Les Deux Princes de Calabar. The original book, The Two Princes of Calabar, was published by Harvard University Press in 2005.

The American Psychiatric Association selected DR. CHARLES ZEANAH to join more than 120 world-renowned scientific researchers and clinicians to develop the fifth edition of the association's Diagnostic and Statistical Manual of Mental Disorders. Zeanah, professor and chief of child psychiatry in the School of Medicine, will participate in the Disorders in Childhood and Adolescence Work Group.