For New Orleans area alumni who want to continue learning, Tulane offers a program aimed at getting them back on campus. The latest in a series of lectures by Tulane Alumni Lifelong Learning (TALL) will be a presentation on Tuesday (April 21) on Cajun and country music in the American South by adjunct history professor Kevin Fontenot. 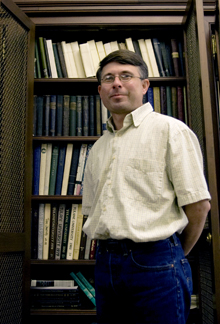 “I think this program is interesting and will provide an important outlet and connection for alumni,” says Kevin Fontenot, adjunct history professor. (Photo by Ryan Rivet)

When he addresses the group at 3 p.m. in Stibbs room 203 at the Lavin-Bernick Center, Fontenot will be discussing the career of musicians Joe Falcon and his wife, Cleoma Breaux, who are remembered for recording the first Cajun record.

“You don't hear much else about them,” says Fontenot. “But if you follow the arc of their career, they later became more heavily influenced by jazz and country music.” Fontenot's talk will be based on a paper that he presented last year at an international country music conference.

Fontenot says he is happy to be participating in the TALL initiative and to have the opportunity to connect with alumni.

“I think this program (TALL) is interesting and will provide an important outlet and connection for alumni,” he says. “Once people graduate, they go off and don't always interface with the university community. I think for those who are living here in New Orleans, it is a way to reconnect and stay in touch with the university.”

A partnership between the Tulane Alumni Association and the School of Continuing Studies, TALL gears its educational programming toward alumni in the 50-plus age group. Programs are free and offer sessions led by Tulane faculty members on a variety of topics on campus as well as networking opportunities.

The TALL presentations take place on the third Tuesday of each month. Next up in May is Susan Tucker, curator of books and records at the Newcomb College Center for Research on Women, a part of the Newcomb College Institute. She'll speak about her latest book, New Orleans Cuisine: 14 Signature Dishes and Their Origins.

Richard Campanella, associate director of the Tulane/Xavier Center for Bioenvironmental Research, will be the speaker in June. Campanella, a geographer, is the author of Bienville's Dilemma: A Historical Geography of New Orleans, which was named one of the best books of 2008 by the Times Picayune. In July, Brian Brox, assistant professor of political science, will discuss political polling and local attitudes toward city government.