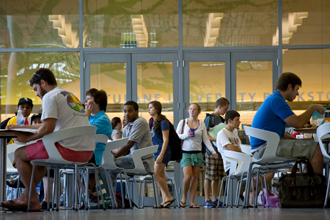 Interest in Tulane University is at an all-time high, with applications for undergraduate admission soaring to new levels. (Photo by Paula Burch-Celentano)

The number of applicants reveals a renewed, sustained interest in Tulane just three and a half years after Hurricane Katrina flooded 70 percent of its campus and inflicted more than $650 million in damages. Based on the latest figures, Tulane's applications have now more than doubled since Hurricane Katrina.

In addition to breaking its own application record of last year, the academic quality of Tulane's applicant pool is at an all-time high. Hence, the university anticipates setting another academic quality record for its fall 2009 entering class, as it did in fall 2008.

“At this time last year we had 33,756 applications and we thought that was an amazing number,” Tulane University President Scott Cowen says. “This year's applicants, both in terms of numbers (39,763 and counting) and quality, are nothing short of phenomenal.”

Cowen credits the increased interest in Tulane to several factors, including a universitywide Renewal Plan enacted after Hurricane Katrina that made public service a requirement of graduation. Tulane is the only major research university in the country that has public service as part of its core curriculum.

Since this requirement became effective in 2006, Tulane has been nationally recognized for its civic engagement programs, while being consistently ranked in the top tier of national research universities.

Tulane also was named one the “Hottest Schools in America” by Newsweek magazine in 2008, the second time it received that recognition in the last six years.

Tulane's fall entering class will be selected based on their SAT/ACT scores, high school class rank and other factors including writing and communication skills, character and level of community involvement.