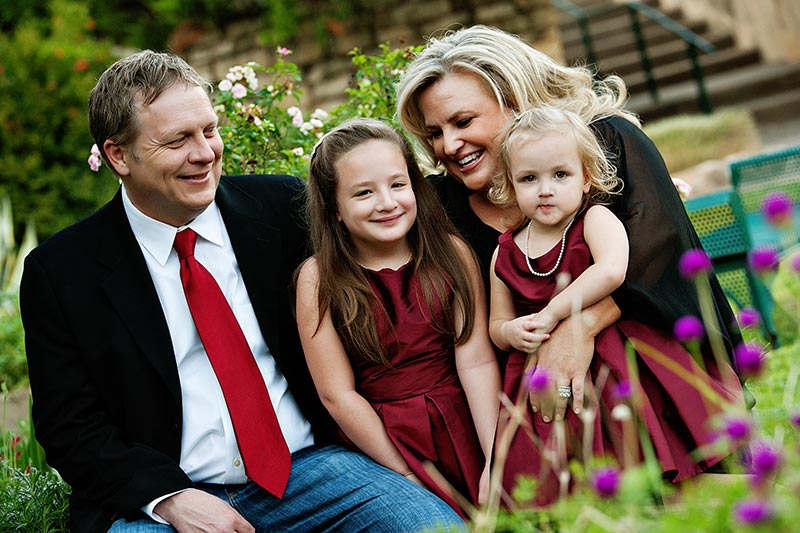 The two daughters of Tulane alumnus Chris Andrews, left, and his wife, Pam, second from right, were diagnosed with a rare, life-threatening illness called Niemann-Pick Type C1. In February, People magazine published a story and 20-minute video about the family’s fight to help daughters Belle and Abby. (Photo provided by Chris Andrews)

Tulane University alumnus Chris Andrews (TC ‘94) and his wife, Pam, received heartbreaking news last year when their two daughters, Belle, now 7, and Abby, now 2, were diagnosed with a rare, neurodegenerative genetic disease called Niemann-Pick Type C1 (NPC1). Since their diagnosis, the Andrews family is inspiring and giving other families hope with their courage and determination. People magazine published an article about their journey in the March 7 issue.

NPC1 is sometimes referred to as “childhood Alzheimer’s.” Children with NPC1 cannot process lipids efficiently, causing them to build up, most dramatically affecting the brain, liver, spleen and lungs. Most children do not live to adulthood. There is currently no cure.

The Andrews family persisted in finding help for their two girls. They began researching NPC1 and building a large community of support.

“We live with a tremendous amount of hope.”

At first they traveled from their Austin, Texas, home to Chicago every other week, participating in a clinical trial for infusions of VTS-270, a drug that may slow the progression of the disease. But today children with NPC1 can receive the medicine at Dell Children’s Medical Center in Austin. “With an absolute herculean effort, my wife was able to get a trial site opened in Austin. It was an amazing accomplishment,” Chris Andrews said. “We do have to go back to Chicago periodically, and the NIH in Maryland as well, but not every two weeks. It has taken a tremendous burden off our family.”

To raise money for neurodegenerative research, the Andrews family created the Firefly Fund, which they launched with celebrities including journalist Dan Rather and a video by actor Matthew McConaughey. The nonprofit’s mission is “to fund the acceleration of research and education needed to find a cure for neurodegenerative diseases affecting children.”

The family seeks to share hope, information and the joy of living with other NPC1 families. “Our house is a very fun-filled, laughter-filled house,” Pam Andrews said in the video. “We live with a tremendous amount of hope.”

To read the People article and see the video, click here.

To directly support the Andrews family with their medical expenses, visit their GoFundMe page.