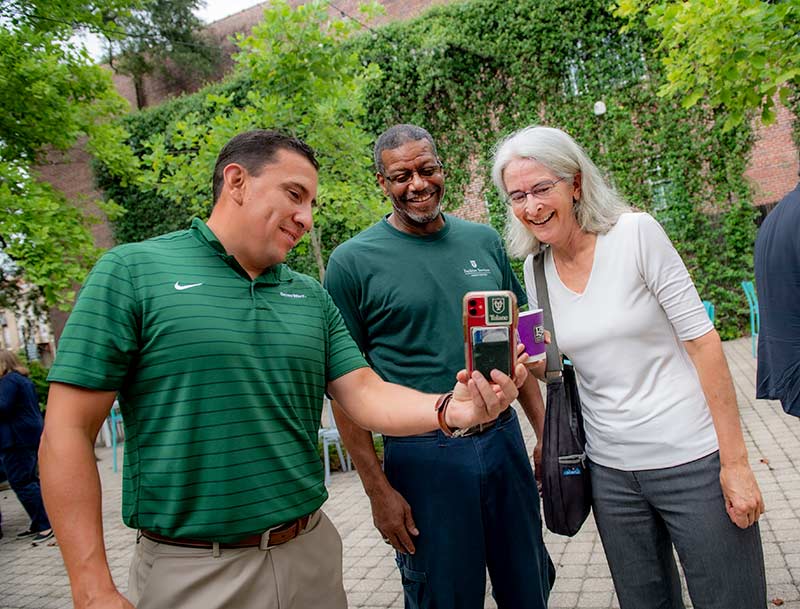 Galo Yepez, left, and Leander Lowery, center, share a laugh with their former boss Liz Davey, as they talk via FaceTime with a 2001 alumnus who is now working in the environmental sustainability field. Davey, the first director of the Tulane Office of Sustainability, was a mentor to the alumnus during their time as a student. Davey left the university on Friday, July 15, after 23 years of service. (Photo by Paula Burch-Celentano)

After two decades of leading the Office of Sustainability, Liz Davey’s last day in her role at Tulane was Friday, July 15. Davey (far right) was an innovator in making the Tulane campus more sustainable and environmentally conscious, serving as a resource to campus partners, usually students, to push Tulane toward becoming a model green university. During Davey’s tenure, the office has established the campus recycling program, water bottle-filling stations, the annual Tulane Greenhouse Gas Emissions Inventory, several LEED-certified buildings and facilities and more. Jordan Stewart, assistant director of the Office of Sustainability, will lead the office until a new director is appointed. To read previous coverage about Davey's impact on the university, click here.