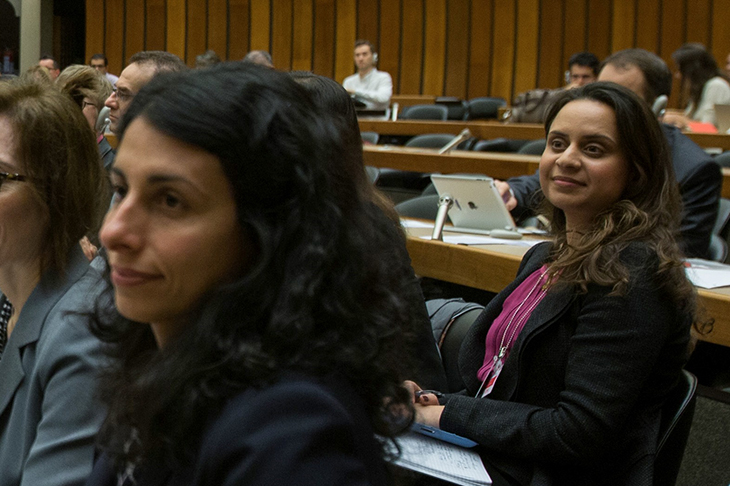 Ashika Singh, right, now a Forrester Fellow at Tulane Law School, provides legal assistance in 2014 to the U.S. State Department team as it presents before the United Nations Committee Against Torture in Geneva. (State Department photos by Eric Bridiers)

As a high schooler in Hong Kong, Ashika Singh tackled daunting contemporary issues during debate competitions against students in Beijing and Seoul and collaborated with other teens at a Model United Nations to solve international problems.

But her subsequent work as a lawyer at the U.S. State Department taught her a sober lesson: “It works well in high school; it gets difficult when you get in the real world,” she said.

“It’s a war of ideas as much as a war on the battlefield.”


Now a Forrester Fellow at Tulane Law School, Singh is delving as a scholar into the kinds of legal quandaries she saw in practice during four years as State Department attorney-adviser handling assignments involving the Benghazi attack, Guantanamo Bay detainees and other international law matters.

She is writing a paper that develops a framework for guiding choices to protect human rights during wartime.

That work grew out of Singh’s involvement in the United States’ presentation before the United Nations Committee Against Torture on compliance with obligations to prevent torture and cruel treatment.

She worked with the State Department team that represented the U.S. in Geneva in 2014, which provided insight into the difficulty of interpreting and applying the law in the face of morphing terrorism threats.

“The U.S. is one of the leading figures in the development of human rights law,” while ISIS accepts slavery, torture and other brutal practices, she said. “If we have to defeat them by resorting to their tactics, who’s really won in the end? It’s a war of ideas as much as a war on the battlefield.”

Singh served under Secretaries of State Hillary Clinton and John Kerry. One of her first major tasks was advising the Accountability Review Board that conducted a comprehensive study of the 2012 attack on the U.S. compound in Benghazi, Libya, that killed four Americans.

Through the two-year Forrester Fellowship, Singh is teaching Tulane law students legal research and writing while pursuing her scholarship, with the goal of eventually teaching international law.