With the passage of House Bill 1054 during this past Louisiana legislative session, the Scott S. Cowen Institute for Public Education Initiatives at Tulane marks a first in its efforts to improve education in New Orleans. 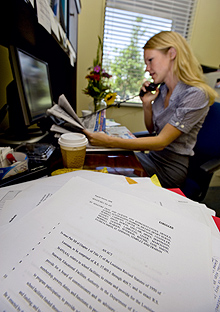 According to Nash Molpus, associate director of the Cowen Institute, the New Markets Tax Credits Program could provide an additional $1 to every $4 of funding provided for the planning, renovation and construction efforts of school properties. The new legislation allows school boards to establish public benefit corporations, which, unlike school boards, are eligible for the tax credits.

"This was a great accomplishment for us," says Molpus. "We took the bills from inception to passage and we didn't get any 'no' votes in the legislature. The process was lengthy and required us to spend several hours each day for many months to push the bills all the way through. This was our first effort to pass legislation and we're planning to continue pushing forward in the years to come. "

Senate Bill 632, which would have established the Louisiana Statewide Educational Facilities Authority for the purpose of administering funding for local school districts to use for construction and repairs, and House Bill 962, which would have established a fund in the state treasury to support a facilities authority, were also submitted, but vetoed by Louisiana Gov. Bobby Jindal.

The Cowen Institute was formed in March 2007 to aid in the recovery of New Orleans public schools after Hurricane Katrina. By May 2007 the Cowen Institute had already begun preparing for the 2008 legislative session.

Molpus says that the goal of Bills 632 and 962 were to bring Louisiana up to speed with the 41 other states that already have educational facilities authorities.

"When we talked to teachers, principals and students about their critical needs, facilities and funding were the top two issues. That's when we decided to tackle facilities first," says Molpus. "The school facility authority would have been a mechanism to provide schools with additional funds and to encourage locals to give more through taxes to their local school facilities."

Despite the governor's veto of two out of three bills presented, Molpus says the Cowen Institute celebrates having a voice in the lawmaking process and will continue fighting for New Orleans public schools.

"There are very few institutions and nonprofits that are able to conduct their own research, write the legislation, find someone to sponsor it and work all the way through this process," says Molpus. "We're setting a new precedent for creating social change that will serve as a model for other research universities to follow. We plan to continue fighting for all the children of New Orleans and Louisiana."