The multifaceted, grassroots effort of New Orleanians and non-local volunteers to rebuild the city after Hurricane Katrina despite the scarcity of governmental support is the focus of The New Orleans Tea Party, a documentary film co-created by a Tulane faculty member. 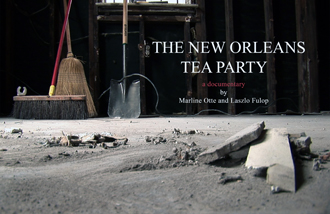 Using interviews with residents, neighborhood activists and celebrity supporters, filmmakers Marline Otte of Tulane and Lazlo Fulop of the University of New Orleans depict the city's intent to rebuild after Katrina.

While it has been a challenge for national media to adequately convey the scope of the damage sustained by New Orleans from Katrina and the subsequent failure of the city's levee system, an even more elusive story to report has been the city's ongoing, piecemeal recovery from the storm. The documentary by Marline Otte and Lazlo Fulop fills that gap with personal stories of people directly involved in the rebuilding process.

Otte, an associate professor of history at Tulane, and Fulop, an assistant professor of communication at the University of New Orleans, spent 18 months on the project, stitching together numerous interviews with residents, neighborhood activists, volunteer agency coordinators and celebrity supporters who are united by a common interest to move the city's recovery forward.

The filmmakers opted not to use voice-over by a narrator, and the 74-minute film is told exclusively through the stories of the individuals interviewed.

“We wanted it to be narrated by New Orleanians,” says Otte. “Too many films about New Orleans are either voiced-over or are choosing the vernacular over the articulate, where people are seen as originals, but in condescending ways.”

In allowing locals to tell their own stories, Otte says she and Fulop hope viewers will come to understand the limited, often thorny set of options faced by residents deciding whether to rebuild or relocate.

“We wanted those who see the film to realize how thoughtful people are about their choices,” says Otte. “They are very careful about making decisions.”

Otte, who holds the Sizeler Professorship in Jewish Studies, has been at Tulane since 2000. A native of Germany, she was writing the first chapter of a book on post-World War II Berlin when Katrina made landfall.

“There were evacuees coming back to the city after the destruction of Berlin, but not recognizing the city,” says Otte. “The roads were different, the landmarks were not there any more.”

The parallels  and differences  between Berlin and New Orleans were striking, says Otte. “I became interested in how people cope with destruction and cope with trauma, but also what kind of coping mechanisms developed as a result of that.”

Thematically, the stories of post-war Berlin and post-storm New Orleans are congruent, says Otte. “They share the same problems of rebuilding a civil society. How do you forge bonds of trust in the democratic process and government in communities that have been completely disrupted?”

What began as an oral history project conducted with the help of graduate students eventually resulted in The New Orleans Tea Party, which gets its title from a comment by a local architect who references the unprecedented, perhaps revolutionary, grassroots support for the city's rebuilding.

“I think that we're back in Boston Harbor,” says New Orleans architect Steven Bingler. “I think this is the Boston Tea Party.”

“Katrina was originally perceived as a story of governmental ineptitude and indifference,” says Otte, “and that mobilized people in ways that surpasses the traditional patterns of volunteerism. Over and over again, volunteers have told me that it's not about charity but duty.”

The film was screened on Tulane's campus in October, and Otte says she and Fulop are currently organizing a tour to screen the film on other campuses.