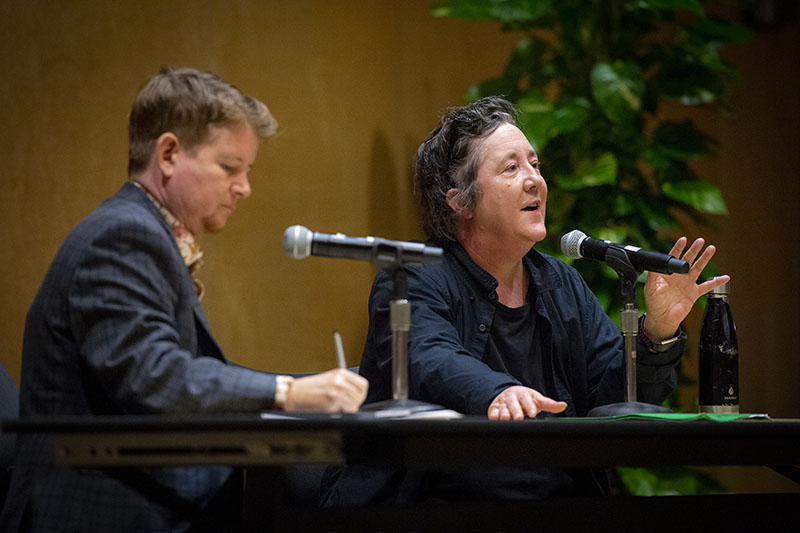 Tulane Professor of Practice Red Tremmel moderates as Christine Vachon speaks to the audience during the inaugural Bobby Yan Lectureship in Media and Social Change on Nov. 6. (Photo by Paula Burch-Celentano)

In a witty and down-to-earth appearance, Christine Vachon, co-founder of Killer Films, visited Tulane on Nov. 6 as the first speaker in the Bobby Yan Lectureship in Media and Social Change in the School of Liberal Arts.

Vachon, whose independent film company produced “Boys Don’t Cry,” “Still Alice,” “I’m Not There,” and “Far from Heaven,” has been associated with the “new queer cinema” movement of the 1990s, since many of the company’s titles have LGBT themes. Vachon said her producing films with those themes arose from not seeing LGBT men and women on screen.

“There was a feeling that if you didn't tell your story, you’d never get to tell it. And nobody's going to help you. There was kind of do-it-yourself-ness at the time,” she said. Moreover, at that time independent directors and filmmakers such as Spike Lee and Jim Jarmusch proved that small-budget movies could actually make money.

“I don’t want to see a movie that's ‘good’ for me ... I do want to make movies that provoke and excite and sometimes upset.”

“We've made a lot of movies that I feel really are made for underrepresented audiences, that try to tell the stories of outsiders,” she said. “It's kind of a fine line. Like, I don’t want to see a movie that's ‘good’ for me. And I presume most people don't, right? But I do want to make movies that provoke and excite and sometimes upset.”

Shortly after the real-life 1993 murder of Brandon Teena — the transgender protagonist of “Boys Don’t Cry” — a scriptwriter approached Vachon with an unfinished student film about the murder.

The story seemed to be unknown; few publications had reported it.

“There was also something about the story that struck me as almost peculiarly and specifically American. It was almost like a Western: A stranger comes to town. And what happens?” Vachon said of her intrigue.

Today, “Boys Don’t Cry” is 20 years old and filmgoers are still discussing its merits and controversies.

The session, moderated by School of Liberal Arts Professor of Practice Red Tremmel, included audience questions geared toward students who hope to work in the film industry someday.

When Tremmel asked which of Vachon’s skills might be useful to students, Vachon replied, “I think our skill set at Killer is very good taste and a sense of what makes something makeable,” in terms of star power, financing, reflections of zeitgeist.

And decades of experience, she added in a deadpan tone. “It’s just 30 years of only doing this, and that is my skill set. So you guys just gotta wait 30 years.”

The Bobby Yan Lectureship in Media and Social Change is part of the Tulane Trailblazers initiative, which celebrates the contributions of people from diverse backgrounds who have made a substantial and lasting impact at Tulane. It is named after six-time Emmy Award winner Bobby Yan, a 1995 Tulane graduate who founded Tulane’s Asian American Student Union. 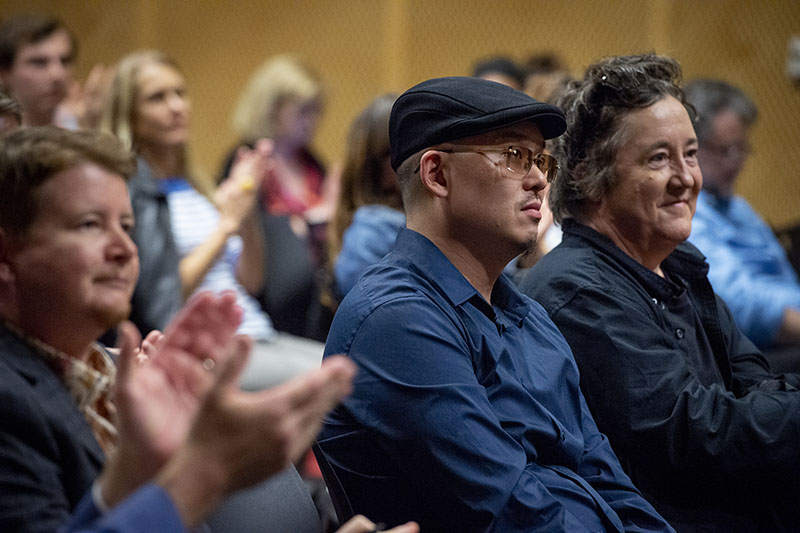