It's been a busy year for the film industry in New Orleans. Five films are currently in the pre-production or filming phase in the city, with several of those projects shooting scenes on Tulane's uptown campus over the next few weeks. 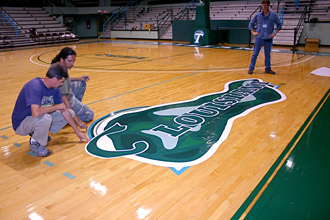 The Green Wave logos on the basketball court of Avron B. Fogelman Arena in the Devlin Fieldhouse are covered with the logos that will be seen in the film Hurricane Season. (Photos by Tricia Travis)

The university, which typically is unable to accommodate large-scale Hollywood film projects during the school year, in the past has played host to movies during the hot summer months when students are away, but the campus has never been in such demand.

"We've received nearly a dozen inquiries this year, and it looks as though three or four films have committed to filming on campus this summer," said Michael Strecker, director of public relations, whose office acts as campus liaison for film companies.

The Tulane police, facilities services, UNICCO cleaning and various academic and administrative offices that serve as the locations for filming are all part of the massive effort to host the film productions.

Louisiana, which has been nicknamed "Hollywood South," offers significant tax incentives to the filming industry. That is a major reason why the state has seen such an increased number of projects in recent years.

According to the New Orleans Office of Film and Video, a 25 percent tax credit is granted to motion picture investors based upon the total in-state expenditures of a production, and an additional 10 percent labor tax credit is given for the hiring of Louisiana residents. In addition, Louisiana offers a 40 percent infrastructure tax credit for the building and establishment of state-of-the-art facilities for filming.

The first two quarters of this year are the busiest the city has seen, said Micha Haley of the Office of Film and Video for the City of New Orleans.

"This is a record-setting year for film in New Orleans," said Haley. "Total budgets for films have totaled over $250 million this year so far. And in terms of what they spend here locally, 2008 is already blowing 2007 out of the water. Local spending for the greater metro New Orleans area just for 2008 so far is roughly $180 million."

Beneficiaries of such spending include lumber yards, hotels, office supply providers, security services, dry cleaners and transportation providers, in addition to the hundreds of people employed by the industry. 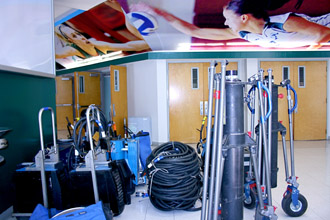 Inside Avron B. Fogelman Arena in the Devlin Fieldhouse, filmmaking gear stands ready for the shooting of Hurricane Season on the uptown campus. The film is based on the true story of the John Ehret High School basketball team in Marrero, La.

As for hosting film crews on the Tulane campus, Strecker said, "We understand and appreciate how important the film industry is to New Orleans. So while logistically it is challenging to host big-budget productions, we do our best to accommodate them when we can."

A film called Hurricane Season began shooting on Thursday (June 5) inside Tulane's Avron B. Fogelman Arena in the Devlin Fieldhouse and will continue on campus through June 12. Starring Forest Whitaker, Isaiah Washington, Bow Wow, and Lil' Wayne, Hurricane Season is based on the true story of the John Ehret High School basketball team of Marrero, La., which hosted players from five different high schools who were displaced after Katrina. The team won the 2006 Louisiana state championship.

From June 11 to 14, Living Proof, a Lifetime television movie starring Harry Connick Jr., with Renee Zellweger as executive producer, will be filming inside a laboratory in the Israel Building. This film is based on the true story of Dr. Denny Slamon, who helped develop a breast-cancer drug called Herceptin.

Still under negotiation for later this summer is the use of the football practice fields for a small independent horror film called 10,000 Doors.