Flicks Focus on Women at Work

A film series titled “Ladies of the Silver Screen: Women in the Workplace” is getting Tulane students to discuss Hollywood's portrayal of women at work. Today's (March 4) showing of Working Girl marks the third of five films being presented this semester. Mary Ann Maguire, associate dean of Newcomb-Tulane College, will facilitate a discussion after the movie. 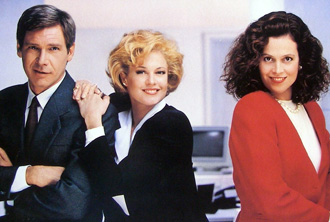 “I think it is always valuable to expose students to the wide variety of experiences that women have in today's workplaces,” says Maguire.

The 1988 romantic comedy Working Girl is set in the 1980s and follows Tess McGill (Melanie Griffith) as she attempts to rise up the corporate ladder at a Wall Street investment firm. The movie trails the star as she takes up evening courses and juggles a relationship with her less-ambitious boyfriend.

Working Girl won an Academy Award in 1989 for best music and original song for Carly Simon's “Let the River Run,” which also won a Grammy in 1990. In addition, the film had five other Oscar nominations that year  Griffith for best actress in a leading role, Joan Cusack and Sigourney Weaver for best actress in a supporting role, Mike Nichols for best director and producer Douglas Wick for best picture.

Melanie Lee, student program coordinator for the Newcomb College Institute, implemented the film-and-discussion format for first time this spring. Lee says each semester the film series will address different issues, such as the role of women in sports or politics.

Next on tap for this semester's series is the April 1 screening of Nine to Five, starring Dolly Parton, Jane Fonda and Lily Tomlin, followed by the April 22 screening of Party Girl starring Parker Posey. All films will begin at 3 p.m. at the Newcomb College Institute and will be followed by a faculty-led discussion.

The “Ladies of the Silver Screen” series is free and open to Tulane faculty, staff and students.

The Office of Newcomb Student Programs operates under the Newcomb College Institute to offer enriching leadership and academic programming.