Creating an influenza vaccine from year to year can be a tricky proposition. It's considered by many to be as much art as science. Every few years, scientists can completely miss the mark. This past flu season is one of those years, according to Robert Garry, professor of microbiology and immunology at the Tulane University School of Medicine. 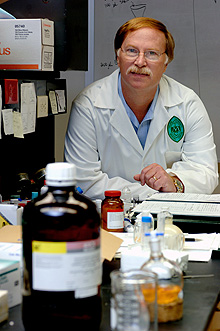 Robert Garry, professor of microbiology and immunology at the School of Medicine, says developing a vaccine every year is not an exact science. (Photo by Paula Burch-Celentano)

“It happens from time to time,” says Garry. “They try to collect surveillance data from all over the world and make an educated guess about which strains will emerge. This year they failed to predict correctly. It's not an exact science.”

That is true of any year: researchers try to guess which three strains of flu will be the most common. This gamble is never completely accurate. In the best years, flu vaccines are only about 80 percent effective. This year, however, that number plummeted to around 44 percent, at best.

“The best they can hope for is about 70 to 80 percent coverage,” Garry says. “This year is the worst-case scenario  they missed on two out of three viruses.”

While dismal statistics may cause some to scratch their heads as to what the U.S. Centers for Disease Control and Prevention and the World Health Organization are doing, Garry said the migratory nature of people these days, makes the already difficult job of developing a vaccine that much harder.

“These days, with people flying all over the world, it doesn't take much for these viruses to spread. It makes predicting the strains much more difficult.”

According to Garry, strains typically pop up abroad and are then transported to the United States. This year, however, one of the more virulent strains that knocked people down for weeks on end was first discovered in Florida. This uncommon development left Americans completely exposed with the current inoculation.

“With these kinds of viruses, people have no immunity to it,” Garry says. “But these types of viruses are not going to cause a pandemic. Conservatively, the 1918 pandemic killed 20 million people. We have better health care now; we're not going to see that level of mortality.”

Garry said that the key factor in stopping a case of the flu from becoming fatal is proper health care, particularly in post-Katrina New Orleans.

“Access to health care is always an issue, particularly for the segments of the population that could be killed  the very young and the very old. They could definitely be at risk for a secondary bacterial infection, which is what usually kills. Those at-risk patients need to see a doctor to get antibiotic treatment.”

Despite the low efficacy of this year's batch, Garry insists everyone should still get vaccinated before flu season every year.

“It never makes things worse, and half protection is better than no protection at all. They're right about the vaccine more often than not.”