When Celeste Uzee was developing her course, "Food and Culture in Louisiana," she used a tried-and-true process that has resulted in many a good home-cooked meal. 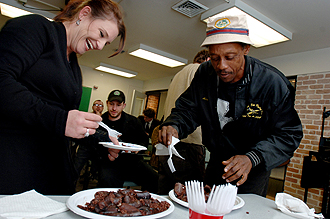 By snacking on “boudin rouge” (blood boudin sausage) and other indigenous culinary offerings, students are encouraged to make connections between Louisiana food and the culture that provides it. (Photo by Paula Burch-Celentano)


"I created the course from scratch," says Uzee, who when not teaching as an adjunct instructor serves as the director of communications and special projects in the Tulane School of Continuing Studies.

The course is an offering of the school's Louisiana Studies program. Before anyone begins to tie on an apron Uzee wants to make it clear that she is not teaching a cooking class.

"The class is about food and identity," says Uzee. "Discourse about food is a necessary condition if you are going to have a vibrant food culture."

With its multiethnic citizenry and passion for communal gatherings over food, Louisiana has a relationship with food that is special, says Uzee.

"The collective is important in Louisiana. We share who we are through group participation, even if it's eating fried chicken out of a greasy cardboard box during Mardi Gras."

After all, "it's not culture unless it's shared," she says.

Uzee engages her students in "fieldwork" that not only has them taking notes at local festivals but also has them compiling food diaries of everything eaten and drunk in a week.

In addition, each student is asked to observe someone they know prepare a dish, listening as the person describes the process. The student then standardizes the preparation in the form of a recipe that would appear in a cookbook. In doing so, students explore the "improvisational" nature of home cooking, Uzee says.

"The difference between home cooking and cooking recipes is similar to that of jazz and classical music," says Uzee, who has no trouble finding cultural metaphors.

That's because everything humans do is interrelated.

"The language of food is the language of art," says Uzee, who explores the multidimensional ways that food relates to other cultural activity in a number of ways, including by playing a recording of a food-related song in each class. In a recent class, students listened to "The Life of a Crab Fisherman," a lamentation on the hardships of fishing in the cold month of February in the "Louisiana Voices" collection of the Louisiana Folklife Program of the Louisiana Division of the Arts.

There are also plenty of opportunities to sample items selected from the local cuisine. Whether they are snacking on blood sausage or dried shrimp, students are encouraged to make connections between the food and the culture that provides it.

"I hope students come away with a greater appreciation about the power of food in their lives," says Uzee. "Too often in modern America we do not put a whole lot of thought into our sustenance. It is a daily act, but it doesn't have to be an automatic one."