Football and Volleyball in Weekend Action

It's a Green Wave weekend for Tulane fans. The football team makes its home debut in the Louisiana Superdome on Saturday (Sept.13), and the women's volleyball team hosts the Allstate Sugar Bowl Classic tournament on campus. Tulane faculty and staff members as well as students will receive free admission to all games. 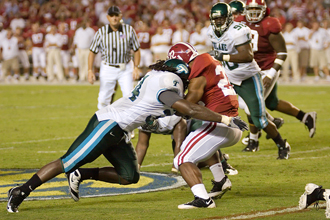 Green Wave senior linebacker Evan Lee makes a big stop for Tulane in the opening game on the road against the University of Alabama. (Photos by Dave Browning)

The volleyball team starts off the events on Friday (Sept. 12) with the tournament's opening match against Jacksonville State University at 7 p.m., followed by a doubleheader on Saturday. The team battles North Dakota State University at 11 a.m. on Saturday and the University of Maryland at 8 p.m., all in Avron B. Fogelman Arena in the Devlin Fieldhouse.

At the Superdome on Saturday, Tulane takes on No. 14-“ranked East Carolina University. It will be “Celebrate Tulane Day,” with all Tulane faculty and staff members, along with their immediate families, receiving a free ticket to the game with a valid Tulane identification card.

The contest will feature a family-friendly atmosphere with pregame activities, including the Tulane Green Wave Tailgate Area (top of garage No. 2) and live music by Rockin' Dopsie Jr. and the Zydeco Twisters beginning at 11 a.m.

Tulane students will receive a free T-shirt upon entering the Superdome while supplies last, and the Tulane Marching Band and cheerleaders will perform during pregame festivities, at halftime and at the conclusion of the contest. 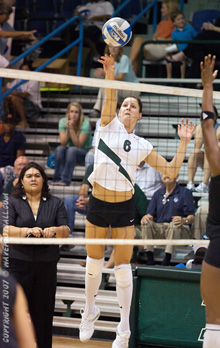 Students, faculty and staff members may pick up tickets at the Wilson Center before 5 p.m. on Friday, or on game day at the Superdome or Avron B. Fogelman Arena in the Devlin Fieldhouse. The faculty/staff entrance at the Superdome is Gate E.

The football team is facing its second nationally ranked opponent. Last Saturday (Sept. 6), Tulane held its own at the University of Alabama before falling, 20-6.

During the game in the Superdome, one lucky fan will have the opportunity to win $10,000 between quarter breaks while one Tulane student could win $15,000 at halftime. Fans and students have to sign up for the drawings in the tailgate area outside of the Superdome.

While Tulane employees can attend any of the three weekend volleyball games free of charge, any fan with a ticket stub from the Tulane-East Carolina football game will be admitted to Saturday night's Green Wave-Maryland volleyball match for half price.

The Wave volleyball team returns home after opening the season with an 11-day road swing that included stints in Provo, Utah, and San Luis Obispo, Calif. The team, which enters the Sugar Bowl Classic with a 2-4 record, has won its last 13 matches in Avron B. Fogelman Arena in the Devlin Fieldhouse dating back to the 2006 season.

“We've been undefeated at home for a while now and a big part of that is the environment and the atmosphere here in Avron B. Fogelman Arena in the Devlin Fieldhouse,” head volleyball coach Liz Kritza said. “We are looking for our fans and our students to come out and support us to help us continue this home streak.”