Forging the Environment for Innovation

When Burkenroad Institute director Laura Cardinal selected the topic for this year's Burkenroad Symposium  Leadership and the Eye for Innovation  she knew it was a subject of interest to business students and executives. She just didn't realize how relevant it would become. With the global economic crisis and the recent passage of the stimulus bill, technology and innovation have emerged as major themes in discussions of how best to expand the U.S. economy. 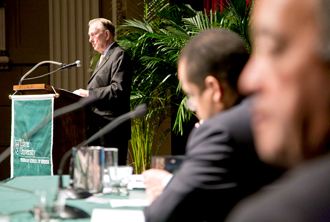 For the 16th annual Symposium on Business and Society, which took place on Friday (March 6) in Dixon Hall, Cardinal brought together a panel of experts who addressed the topic of leadership and innovation from markedly different perspectives.

“Science and technology are a vital component of economic growth,” Bement said. “The White House and Congress agree that job creation, infrastructure improvements, energy efficiency and other means of stimulating the economy depend on a foundation of basic research and education. If we fail to continue investing in that base, the bloom on the rose will fade quickly, leaving behind few prospects for sustainable long-term growth.”

Robert M. Price, president and chief executive officer of PSV Inc. and former chairman of Control Data Corp., a pioneer in the field of supercomputing, emphasized the intersection of three critical concepts  technology, innovation and entrepreneurship  that historically have combined to bring about dramatic economic change and progress.

“Innovation and entrepreneurship are so tightly interwoven that frequently innovation and entrepreneurship are embedded in the same person,” Price said. “That does not have to be. The eye for innovation has two meanings. One is the ability to see innovations that have real-world economic potential, and the other is to see what someone else has done that has that same potential. Leadership is very simply forging the environment in which these wonderful things can happen.” 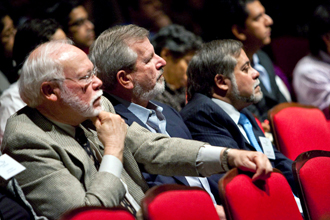 Intently listening to a symposium speaker are, from left, James McFarland, professor and executive director of the Tulane Energy Institute; John E. Koerner III, member of the Board of Tulane; and Angelo DeNisi, business school dean.

Looking at leadership and innovation from a different point of view, Patrick J. Yam, chief executive officer and founder of Sensei Partners, spoke from the perspective of a venture capitalist focused on early-stage technology companies. Yam noted that a concentration of capital within a small number of firms in the wake of the dot-com bust, together with the current recession, have resulted in a critical lack of support for early-stage technology enterprises. Yam founded his company to meet this emerging niche.

“In 2008, there were only 440 early-stage technology enterprises funded as compared to 1,177 later-stage companies, a correlation of nearly 3-to-1 for later-stage companies,” Yam said. “Tech entrepreneurs need to understand this change in the venture capital industry. The quicker this understanding is gained, the more efficiently entrepreneurs can maximize their fund-raising efforts by identifying the venture firms best able to strategically assess their firms.”

Albert Johnson, senior analyst in the office of the chief of technology at Corning Inc., focused on leadership at technology and innovation companies. “How do you lead leaders?” Johnson asked. “For those of you who are going to be business leaders in an industrial, governmental or nonprofit context, you're going to have to figure out some things about leading leaders.”

Referencing the human development theories of psychologist Clare W. Graves, Johnson emphasized the importance of understanding the personality types of leaders and what each responds to, but he added that one of the most simple management techniques is also one of the most powerful. “Be sure to communicate genuine appreciation that's more than a routine thank you,” Johnson said. “Appreciation is currency to leadership. Be sure you mind that.”

The Burkenroad Institute is affiliated with the A. B. Freeman School of Business.