Fork in the road: Michael Casey 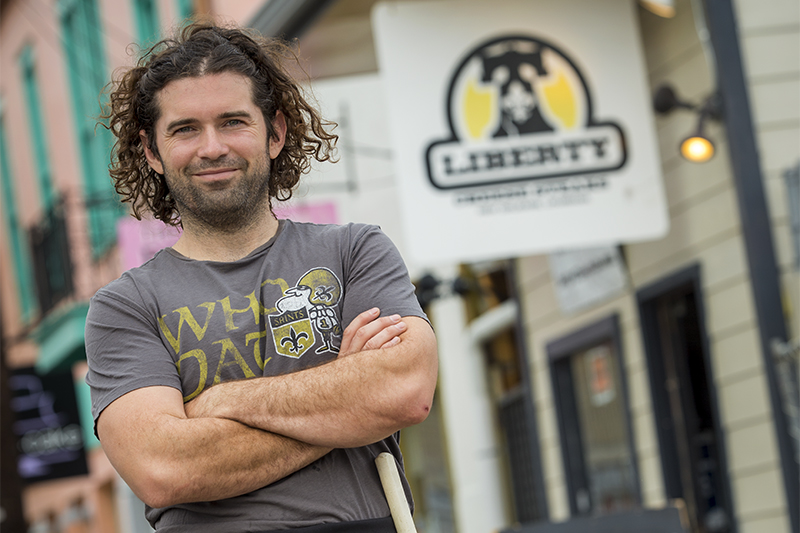 Straight out of Philly, Michael Casey purveys a classic sandwich at Liberty Cheesesteaks in the uptown neighborhood of New Orleans. (Photo by Paula Burch-Celentano)

This is Part I of a four-part series that profiles millennial Tulane alumni in New Orleans’ restaurant industry. Today’s installment: Michael Casey, SLA ’06.

“I didn’t think I could ever care about a place the way I care about New Orleans,” says Michael Casey (SLA ’06) who hails from Drexel Hill, Pennsylvania. Along with Joe Seremet (B ’05) and Seremet’s wife, Alisha Lacour Seremet, Casey founded Liberty Cheesesteaks, a tiny restaurant just a dozen blocks from the Tulane uptown campus.

Casey and Joe Seremet were Sigma Phi Epsilon fraternity brothers and roommates. During Casey’s senior year, Hurricane Katrina hit. But he never had any doubt he would return to finish his senior year at Tulane.

“The city kinda claimed me.”


“Tulane attracts the kind of person who would come 2,000 miles away from home to have an adventure. You’re on the frontier.”

After graduation, Casey and Seremet went their separate ways but stayed in touch. Seremet comes from a restaurant family, and Casey had always worked in bars, but both began pursuing careers in banking. Seremet, a Connecticut native, works now as an investment banker for Johnson Rice & Co., where he is a partner. For a brief time, Casey moved back to Philadelphia. But New Orleans kept calling to him.

“The city kinda claimed me,” Casey says. “The second I got off the plane in Philadelphia, I started to think about how I could get back to New Orleans.” In February 2012, the Seremets and Casey brainstormed the idea for a Philly-style cheesesteak joint. It was something that Casey knew a lot about—he had cooked his hometown’s signature dish many times for his college crowd—and Alisha Seremet had heard her husband raving about the hearty, gooey sandwiches. There was nowhere in New Orleans to go for Philly cheesesteak.

The Seremets suggested the Freret Street corridor between Napoleon and Jefferson avenues, an up-and-coming neighborhood in uptown New Orleans, as a location for a restaurant. And in March 2013, they opened Liberty Cheesesteaks there.

The restaurant also has a large following from film crews in town.

“Shockingly, it’s pretty even between men and women,” Casey says. “We had a lot of stereotypes we came in with … we had bigoted opinions. In our executive summary of our business model, we had 18- to 35-year-old football fans/beer drinkers. But now we have little high school girls come in, and can they eat!”

Casey has become a part of the neighborhood. He is a member of the Freret Business Owners Association, which is trying to develop Evans Park at nearby Soniat and LaSalle streets into a green space where kids can play. Despite ongoing renovations to the city’s drainage infrastructure, which have often necessitated Freret Street closures, the restaurant entrepreneurs are afloat.

Liberty Cheesesteaks has zero debt, and the restaurant is poised to announce the addition of a second location in the Mid-City neighborhood.

Casey is willing to flex a bit in the restaurant’s offerings to attract customers, such as trying curbside service, but he says his authentic Philly cheesesteak is the draw: He brings his thinly sliced New York strip steak from the City of Brotherly Love to the Crescent City.

“I’m not putting shrimp on my cheesesteak,” he insists, adding, “I’m not going to leave New Orleans. I don’t make sense anywhere else.”

Casey knows the moment he began considering himself a New Orleanian. It was November 2007. While teaching at Frederick Douglass High School in the city’s Ninth Ward, the school’s secretary asked Casey if he planned to go home for his birthday to visit his family. He told her no, he considered New Orleans his home.

“Oh, you from here now!” the secretary replied. Casey walked back to his classroom and cried.

“I’ve never had anyone claim me like that. [Only] five years in this city, and a woman just claimed me,” he marvels. “That was so moving.”