Fork in the road: Pizza Delicious 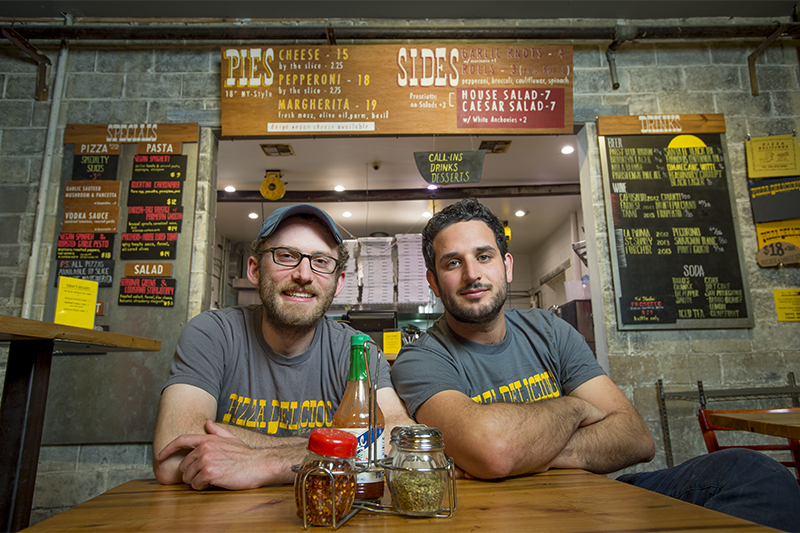 Michael Friedman and Greg Augarten use the finest ingredients in their offerings at Pizza Delicious in the Bywater, drawing customers in droves. (Photo by Paula Burch-Celentano)

Michael Friedman and Greg Augarten, proprietors of Pizza Delicious, are not above putting shrimp—along with other fresh, local ingredients—on their authentic, New York–style pizzas.

“We’re all passionate about the food. If there’s a meatball, we made it. If there are vegetables, we chopped them.”


The duo met at Tulane through mutual friends. They found out quickly that they had mutual interests: the New York Mets, food and pizza. As college roommates, they cooked together often and would invite friends over for elaborate meals. One night, they looked up a pizza dough recipe and rated their fledgling attempt “pretty good.”

Late in 2009, they started fantasizing about opening a restaurant.

“We personally wanted it: thin crust, big pizza,” says Friedman. “And in New York, you can get pizza by the slice.”

The fact that they are running the (arguably) hottest pizza restaurant in New Orleans is a “complete surprise” to these New Yorkers.

Friedman thought that he would be a high school English teacher. Augarten was less sure about his career path and was considering graduate school, either in business or law.

Their restaurant began as a pop-up in 2012. They stumbled upon an old bakery space in the Bywater neighborhood, where they could share the bakery’s dough mixer and pizza oven. Their unusual schedule of opening one night each week attracted attention: Word spread by mouth and social media, and the buzz created demand. It was, as Augarten says, “a pizza adventure.”

“We didn’t go to business school. We knew nothing. But with this, we had minimal overhead,” says Friedman, who volunteered to work at a local restaurant for free, while he was still teaching. The two kept their day jobs, working as a pop-up one night a week, then two nights a week, for three years.

“One of the funniest accomplishments was we found out the mayor’s sister-in-law was picking up pizza from us. And then Mayor [Mitch] Landrieu came twice,” Friedman says. “It’s hilarious because we were doing something under the radar, and the mayor was supportive.”

They got positive press early and would sell out of dough for 60 pizzas in one night. Long lines began to form, with customers waiting an hour for Pizza Delicious.

When Mayor Landrieu heard the news that Pizza Delicious was opening a restaurant at its current location, 617 Piety St., just blocks away from the pop-up space, he reportedly said, “Then you guys won’t be cool anymore.”

But business surged. When people would call to order a pizza, sometimes they got the news that they’d have to wait four hours. But the customers would still say OK.

“We were making a product in the city that wasn’t available elsewhere, and at the time people responded to it,” Augarten says.

“Also there was the story, the intrigue of the pop-up … people thought they were a part of it, and they were emotionally involved with it.
It was cool.”

The restaurant is open six days a week now, and Augarten and Friedman hold down its warehouse location with a long-term lease. The Pizza Delicious staff—now 38 employees—makes its own dough and sauce.

“We’re all passionate about the food,” Augarten says. “If there’s a meatball, we made it. If there are vegetables, we chopped them. We’ll take 50 onions and caramelize them all day.”

Friedman adds, “We’re happy to serve the neighborhood. We still see our regular customers who have been with us from the beginning, but now people come from all over. It’s still a lot of work, but it’s much better, maybe 50 or 60 hours per week, down from 100.”

In 2015, both Friedman and Augarten, the unlikely pizza entrepreneurs, bought houses in the neighborhood.

“Even if Tulane had a school of pizza, I don’t think I would have enrolled in it,” Friedman says.