At 2:46 p.m. on March 11, Tulane molecular biologist Ken Muneoka was on a train near Tokyo, heading north to Tohoku University to check on the progress of a research project. He never arrived, and for that bit of providence, he is a very lucky man. 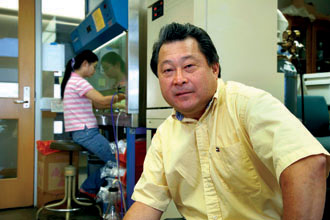 Ken Muneoka's academic trip in Japan came to a sudden halt when the March 11 earthquake struck. He is a professor of cell and molecular biology. (Photo by Rick Olivier)

Tohoku is in Sendai, Japan, just 80 miles from ground zero of the most devastating earthquake in Japan's history. When the magnitude 9.0 earthquake struck, Muneoka's train stopped abruptly and everything started shaking.

“It was very long, two minutes or even more of shaking,” said Muneoka, now home in New Orleans. “It was obvious something big had happened, but it wasn't clear just how big.” As it turned out, “It was lucky for me  I hadn't gone too far north when it hit.”

He spent four hours in the stopped train before it returned to the Tokyo station, now jammed with travelers.

“All trains had stopped, and no one could get to their destination,” said Muneoka, who neither speaks nor reads Japanese. “There was no panicking, but everyone was stuck. At that point, you just drop your bags and go to sleep. From my perspective, because I had gone through Katrina, it was much easier to be calm about it.”

Muneoka had traveled to Japan to give a lecture and visit with colleagues in Sendai who are working on a research project for him. A professor of cell and molecular biology, Muneoka holds the John L. and Mary Wright Ebaugh Chair in Science and Engineering.

Without cell phone communication, he spent two hours waiting in line to use a public phone and reached Japanese friends, who rescued him from the train station. Two days later, he flew back to New Orleans, but admitted he's having a bit of trouble concentrating and getting back into his work on campus.

“It's hard because I know people who are there, not just people I work with, but friends,” including a former postdoctoral student who is in Sendai. He hasn't heard much from the group at Tohoku University, but said, “I'm less worried about the research than about the people.”

For information on Tulane's response to the crisis in Japan, read this Tulane Talk message by President Scott Cowen.