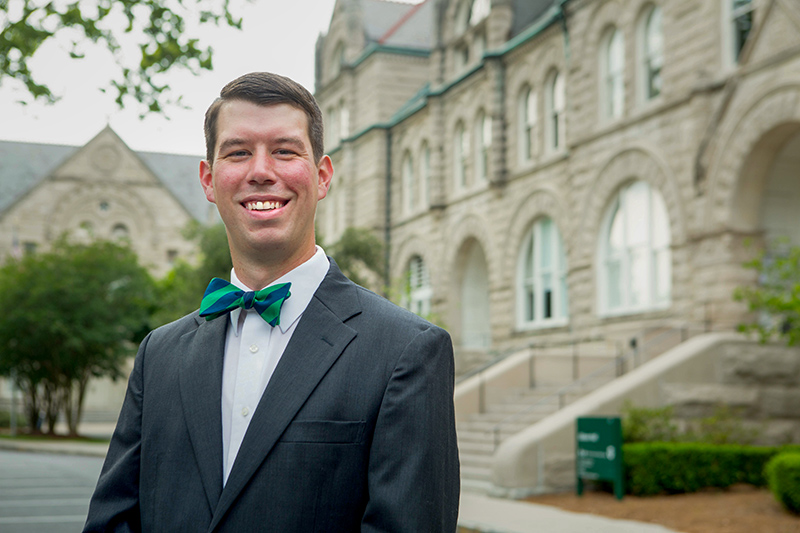 Medical school graduate Danny Sullivan will serve as the student commencement speaker during the Unified Commencement Ceremony on May 19. (Photo by Sabree Hill)

One might say that Daniel V. “Danny” Sullivan’s post-secondary education at Tulane University has been five degrees of perspiration.

Sullivan, who will serve as the student commencement speaker during the Unified Commencement Ceremony on May 19, will earn a medical degree from Tulane School of Medicine. He previously graduated with honors from Tulane in 2009, earning two degrees — a bachelor’s in classical studies and a bachelor’s in biochemistry. He followed up with a master’s in anthropology from Tulane in 2014 and is currently working toward a doctorate where his dissertation focuses on a diagnostic approach to gunshot wounds. Sullivan hopes to complete this degree next year.

The Staten Island, New York, native said he feels fortunate to have spent his entire post-secondary education at Tulane.

“Tulane was a good fit for me so I was happy to stick around."

“It was the ideal campus experience that I wanted,” Sullivan said. “Tulane was a good fit for me so I was happy to stick around.

“Every day that you went into the hospital there was something new, and that excited me—either something with a patient, or something that you were going to learn: a technique, a surgery that you hadn’t experienced before,” he added.

Sullivan’s speech on stage at the Mercedes-Benz Superdome will focus on memories, including an emotional anecdote about his encounter with an Alzheimer’s patient who also happened to be a Tulane alumnus.

Throughout his years at Tulane, Sullivan also served in student government, pursued research projects, and found time for mentoring other students and for community service, often in leadership roles. As the coxswain on the university rowing team, Sullivan said he learned to make hard decisions under pressure and to work as part of a team. He also served as the president of the Graduate and Professional Student Association.

Upon graduating, Sullivan will start a combined anatomic pathology-neuropathology residency and fellowship program at the University of California–San Francisco in July.