The importance of culture to modern-day Europe will be among the themes touched on by Renaud Donnedieu de Vabres, ambassador for cultural affairs for the French Presidency of the European Union, in a lecture hosted by the Tulane Center for Global Education. The talk, entitled “France and Europe Today: Challenges and Opportunities,” is co-sponsored by the French Consulate of New Orleans. 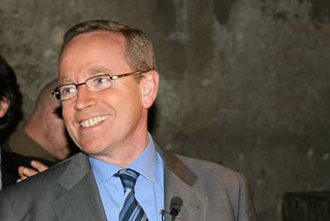 “We must get Europe back on track through culture,” says Renaud Donnedieu de Vabres, who will speak at Tulane on Thursday (Oct. 30).

The event is free of charge and will take place on Thursday (Oct. 30) at 4 p.m. in the Freeman Auditorium of the Woldenberg Art Center, with a reception to follow.

"This is a remarkably high-level visit to Tulane that is the fruit of collaboration between the Center for Global Education and the French Consulate,” says Richard Watts, executive director of the Tulane Center for Global Education. “Ambassador Donnedieu de Vabres has his finger on the pulse of Europe right now and should have some very interesting things to report.”

Watts also is an associate professor of French and associate dean for international programs in Newcomb-Tulane College.

Donnedieu de Vabres is a former minister for European affairs and former minister of culture under President Jacques Chirac. As ambassador for cultural affairs for the French Presidency of the European Union, he works to support the cultural heritage of each European country within the Union.

“We must get Europe back on track through culture,” Donnedieu de Vabres has said. “We must place the question of culture at the very heart of a European political project. It is the best way to inspire popular trust, which will be sadly, and definitively, lacking if we give the impression that we are relinquishing what European culture has to offer.”

France took over the rotating presidency of the European Union on July 1 and will fulfill that role until the end of this year.

Donnedieu de Vabres will be in town to attend the World Cultural Economic Forum, which is taking place Oct. 30-31 and is expected to have representatives from more than 50 countries.

The forum is designed to attract visitors to Louisiana while showcasing the state's cultural assets. “Some of the world's brightest minds will be in New Orleans, discussing the best practices for growing cultural industries as a part of our global economy,” says Louisiana Lt. Gov. Mitch Landrieu. “Together, we will build economic opportunities by supporting creative and cultural industries such as food, film, music and art.”

In conjunction with the forum, there will be a World Bazaar and Marketplace at the Ernest N. Morial Convention Center on Oct. 30â“Nov. 1 from 10 a.m. until 6 p.m. The free event will feature artisans and vendors from across Louisiana and around the world.