Eating just one more serving of green leafy vegetables or three more servings of fruit a day reduces the risk of developing Type II diabetes, according to results of data analysis performed by researchers in the Tulane School of Public Health and Tropical Medicine and the Harvard School of Public Health. The research team also found that one serving of fruit juice a day increased the risk of Type II diabetes in women. 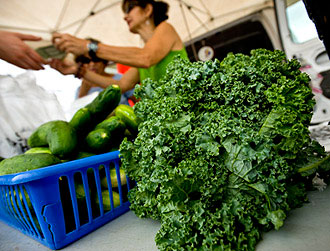 Tulane epidemiologist Dr. Lydia Bazzano says, “Based on the results of our study, people who have risk factors for diabetes may find it helpful to fill up on leafy greens like lettuces, kale and spinach and whole fruits, like apples, bananas, oranges and watermelon rather than drink fruit juices, which deliver a big sugar load in a liquid form that gets absorbed rapidly.”

Bazzano, an assistant professor of epidemiology, cautioned that since this is one of the first studies to separate fruit juice consumption from fruits as a whole, the association between juice and diabetes must be confirmed by additional research.

She and her team analyzed 18 years worth of diet and health data from 71,346 nurses who participated in the Nurses' Health Study from 1984 to 2002. The women were all between 38 and 63 years old and diabetes-free when the study began. Approximately 7 percent of the participants developed diabetes over the course of the study.

The researchers determined that the association between fruit and green leafy vegetable consumption and lowered diabetes risk remained after other factors, such as family history, cigarette smoking and weight, were analyzed. However, they found that women who ate more fruits and green leafy vegetables also were likely to be older, non-smokers and more physically active.

The study appeared in the April 4 online issue of Diabetes Care, a publication of the American Diabetes Association. Co-authors of the article are Harvard researchers Frank Hu, Tricia Li and Kamudi Joshipura.

Bazzano continues to explore the relationship between diet and health with her current research into the possible impact of sodium restriction and potassium supplementation on cholesterol and blood sugar levels.