At its Tribute to Classical Arts luncheon held Monday (Feb. 16), the Big Easy Foundation recognized the New Orleans Friends of Music organization for its contributions to the culture of classical music in the city. Friends of Music, in partnership with Tulane University, presents world-renowned chamber musicians in concert  and has done so since 1954. 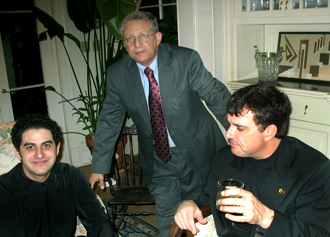 John Baron, president of Friends of Music and longtime professor of musicology in the Tulane Department of Music, says that Tulane's support has helped the program thrive and offer concerts at a low cost for more than 50 years.

Many of Friends of Music's fans, board members, volunteers and financial contributors are members of the Tulane community, he adds.

Tulane donates the use of Dixon Hall for the concerts, allowing Friends of Music to keep concert ticket prices relatively low. The no-cost performance venue has helped the organization survive, says Baron.

“After Hurricane Katrina nearly destroyed Dixon Hall, the university rushed to get the hall in shape so that the very first public classical concert in New Orleans after the hurricane was presented by the Friends of Music,” Baron says proudly.

Friends of Music concerts by high-caliber musicians allow local audiences to hear artists who are setting world standards in their performances, says Baron. “It gives our students and New Orleans residents a standard to aim for.”

The Friends of Music concert series runs from September through May. Two performances remain in the current season. The next performance is scheduled for March 9 and features the Musicians From Marlboro. The concluding season performance features the YsaÃ¿e String Quartet on April 1.