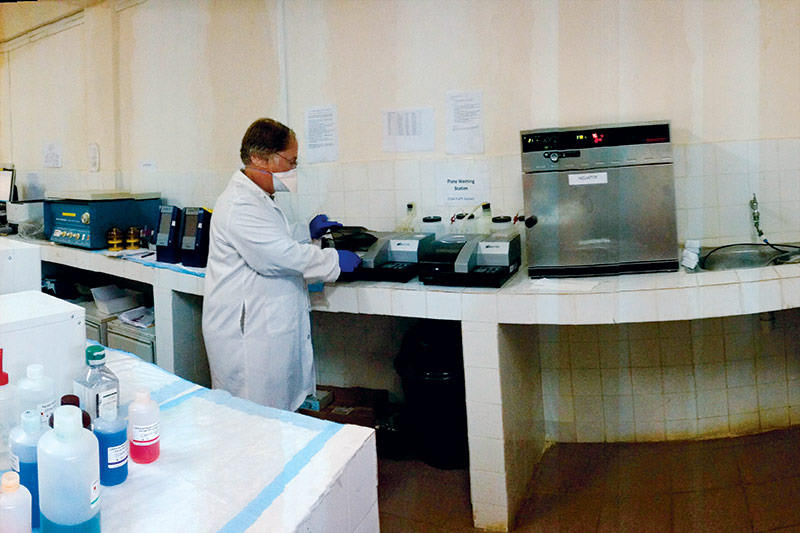 Tulane and the Viral Hemorrhagic Fever Consortium followed the first Ebola patients admitted to the Kenema Government Hospital in Sierra Leone at the beginning of the outbreak in 2014.

A combination of densely populated cities and porous borders between neighboring countries helped ignite the historically deadly West African Ebola outbreak that killed more than 11,200 people, according to a comprehensive genetic study of the virus published in Nature.

Tulane University infectious disease researchers Dr. John Schieffelin and Robert Garry are co-authors of the study which analyzed more than 1,600 Ebola virus genomes to reconstruct the dispersal, proliferation and decline of the virus throughout the region. The study found that population size, geographic distance and international borders all influenced the rapid spread of the virus.

“It was apparent to a few of us familiar with the differences between West Africa and the sites of previous outbreaks in central Africa that this might not be a ‘normal’ outbreak,” Garry said.  “The high population densities and mobile population of Sierra Leone and surrounding countries proved to be a perfect storm, allowing the unprecedented spread of Ebola.”

Tulane and the Viral Hemorrhagic Fever Consortium followed the first 106 Ebola patients admitted to the Kenema Government Hospital in Sierra Leone at the beginning of the outbreak in May and June 2014. The team was able to get an unprecedented amount of detailed laboratory data on the emerging epidemic because researchers had been stationed at the hospital for a decade studying Lassa virus, another hemorrhagic fever endemic to West Africa. Limited clinical and lab data had existed for Ebola outbreaks as prior cases sporadically occurred in remote regions with few resources.

Garry and others warned that the outbreak, which started in rural areas, could spread to more densely populated urban areas where it would be more difficult to control without rapid and decisive international intervention.

“This analysis shows that those very factors, population density and mobility, were what drove the massive Ebola outbreak,” Garry said. “The study also points to interventions that might be useful in the next outbreak."

The full study is available online at http://www.nature.com.