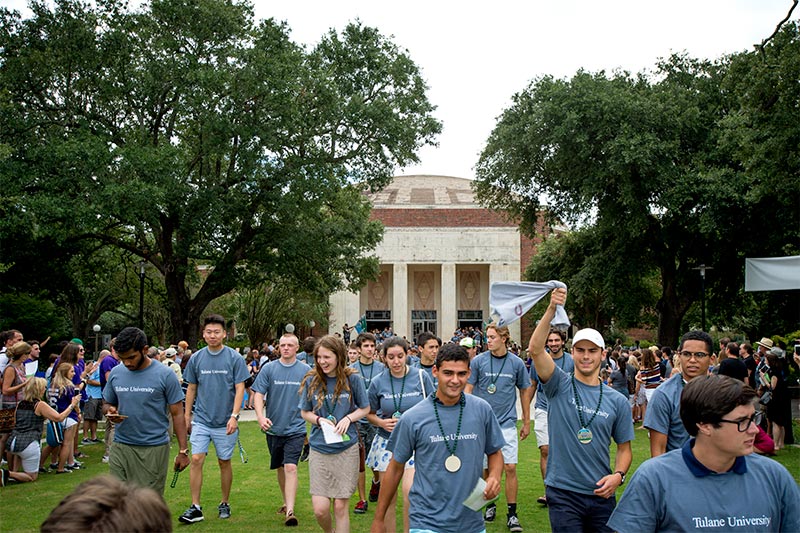 Members of the Class of 2020 enjoy a post-convocation second line on the Lavin-Bernick Center Quad Saturday (Aug. 27) on the uptown campus of Tulane University. (Photo by Paula Burch-Celentano)

The Tulane University class of 2020 is already making waves as the largest first-year class ever. It is comprised of 1,849 students —100 more than last year’s record-setting class.

Tulane President Mike Fitts and other university officials were on hand to welcome and assist the students, as they moved into their campus residences during move-in weekend (Aug 26-28).

Tulane is one of the most geographically-diverse universities in the country with 85 percent of the students traveling more than 300 miles to attend.  The new class features students from 47 states with the majority hailing from New York (258), Louisiana (227), California (204), New Jersey (140), Massachusetts (135) and Illinois (135).

Nearly one-fourth of the incoming class are students of color, multi-racial, bi-racial or international, and just over 41 percent of the class is male.

The top three majors thus far are business, cell and molecular biology and psychology. Three of the newest Tulanians posted a perfect score of 36 on the ACT, while 159 earned a 4.0 at their respective high schools.

The annual arrival of Tulane students on campus has a big impact on the local economy.  A recent report estimated that Tulane students from outside New Orleans have a $133.5 million annual spending impact, supporting 1,520 full-time equivalent local jobs.