Rita Golikeri and Andrew Chan will be among the 29 students at Commencement who are the first to graduate with a four-year undergraduate public health degree from Tulane University. The program began in fall 2005 and in the four years since, its students have helped rebuild the city, raised $35,000 to fight HIV/AIDs in Africa and traveled the world. 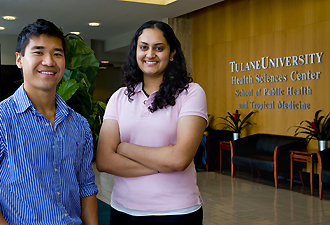 “The program has grown really fast,” says Christopher Lane, manager of the program, noting that 180 students are currently enrolled, 80 of whom are first-year students. “We are attracting idealistic students who are interested in learning how they can contribute to a better world globally and nationally.”

Lane estimates that one-third of the graduates will stay at Tulane and complete the program's 4+1 option to earn their master of public health degrees, another third will attend medical school and the rest will volunteer with programs such as Teach for America and the Peace Corps.

Houston resident Golikeri is planning to complete a master's in cell and molecular biology at Tulane before getting a dual MD/MPH degree. She was passionate about public health before coming to Tulane and says the undergraduate degree offering sealed the deal for her.

Others found their way to public health over time.

“I was going to be a music major,” recalls Chan, a 21-year-old Baton Rouge, La., native. But while he was completing the first semester of his freshman year after Hurricane Katrina, he read a friend's textbook from Tulane's introductory public health class and was hooked. “When I came back there were so many opportunities to get involved in rebuilding and with public health research.”

The hands-on nature of public health led him to change his major and spend a summer in Sierra Leone working with Daniel Bausch, associate professor of tropical medicine, on a Lhasa fever project.

“One very exciting initiative that will launch in the summer of 2009 is an undergraduate international service-learning course in Kuala Lumpur, Malaysia,” says Johnson.

He adds, “The public health students in the Class of 2009 are leaders. After all, how often is it that a major research university launches a new undergraduate degree offering? These freshmen arrived on campus prepared to travel uncharted territory and study public health, but they had a unique chance to live it as well.”