Golfers Tee Up to Support Student-Athletes

It was a beautiful day to be on the golf course when 145 Tulane supporters teed up Monday (March 30) for the Tulane Classic to raise money for Green Wave athletics. While three pro athletes  former Tulane football and basketball stars  joined the teams, 70 current student-athletes worked behind the scenes to make the day a success. 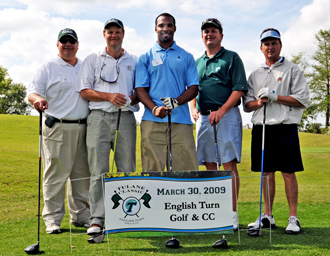 The inaugural tournament, held at English Turn Golf and Country Club, was a sold-out event with participants playing to support what athletics director Rick Dickson called “a truly worthwhile cause  Tulane student-athletes.”

Dickson said, “All proceeds from this tournament will directly benefit our outstanding student-athletes and their endeavors in competition, in the classroom and in the community.”

Along with the Green Wave coaches who joined foursomes of golfers, the presence of pro athletes definitely spiced up play.

Matt Forte, premier running back with the Chicago Bears and a standout at Tulane, joined a foursome of Tulane supporters, and the group took first prize in the tournament. Golfing with other teams on the course were Mewelde Moore, a top NFL running back with the Super Bowl champion Pittsburgh Steelers, and WNBA player Barbara Farris. With a nine-year career in pro basketball, Farris played with the Phoenix Mercury last season, but was acquired last month by the Sacramento Monarchs.

“They were great ambassadors,” said Bower, who also serves as assistant athletic director for external operations. “They loved being part of the day.”

A silent auction included memorabilia signed by the Tulane pro athletes, a trip on the football team's charter flight to play Army at West Point this fall, and events in Superdome and Greer Field at Turchin stadium suites.

With the success of this event, Tulane plans to tee up another fund-raiser in the future. “We've got something we can hang our hat on going forward,” Bower added, “something that's positive for everyone involved.”