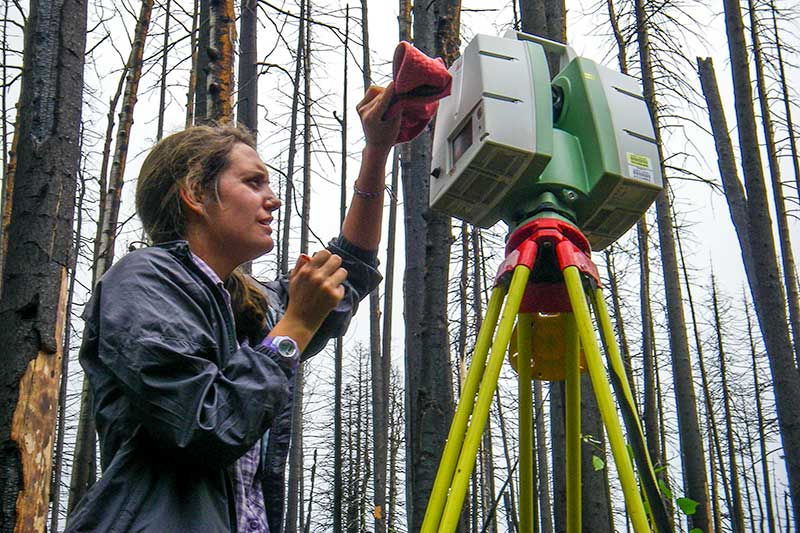 Jordan Adams is no stranger to adventure.

Adams, a doctoral student in the School of Science and Engineering at Tulane, has worked in the mountains of Appalachia, the forests of Arizona and the peninsulas of Hawaii. She’s also worked right here in Louisiana, studying the hydrology of our very own Lake Pontchartrain.

But lately, as the 2016-2017 Vokes Fellow in the Department of Earth and Environmental Sciences, her interest has combined fire and water.

Currently Adams is helping to develop a new, open-source model for interdisciplinary problems in earth sciences: the place where processes in hydrology, geomorphology and ecology meet. Called Landlab, its architects come from research institutions around the country, including Colorado, Washington and Tulane, where EES professor Nicole Gasparini invited Adams to join her group.

Adams’ current research applies extant models of rainfall and water flow to areas that have been burned by major fires. Recently, along with EES undergraduate Carey Schafer, she investigated the burned-out region of Spring Creek in central Colorado in order to understand how rainfall affects scorched soils, looking particularly at heightened erosion and flooding after disasters.

As climate change is linked to increases in extreme precipitation events and changes in wildfire frequencies, she says, “understanding the driving factors of these events becomes even more important.”

Ultimately, Adams hopes that Landlab will enable better prediction of how landscapes are affected when traumatic events occur, and hopefully guide public thinking on where and how to build and rebuild.

“Capturing the erosive impacts of post-fire storm events has implications for both short- and long-term evolution of a landscape,” she notes.

Where her next adventure will take her is anybody’s guess. Mostly, Adams is just grateful for the training.

“These varied field experiences have been invaluable to me as a graduate student and have improved my skills as a researcher.”