Graduate learns to ‘keep going’ for herself and others 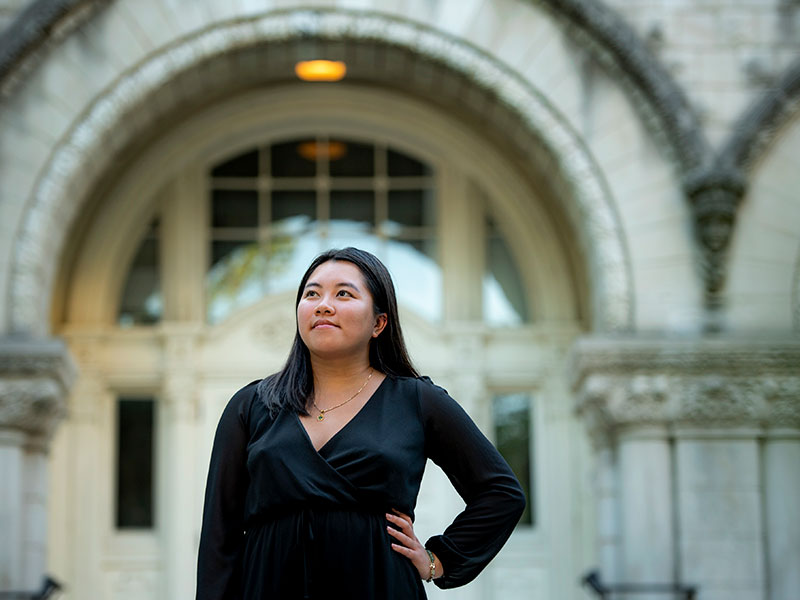 Tran Nguyen-Phuong, a first-generation college student from Louisiana, is graduating with a Bachelor of Science double majoring in psychology and economics. She held several leadership roles in the Tulane Vietnamese Student Association, served on the board of directors for New Student Orientation, held a Design Thinking student fellowship and conducted research in the economics department. (Photo by Paula Burch-Celentano)

When Tran Nguyen-Phuong first entered her freshman year at Tulane, she had a rocky and overwhelming transition.

“I went through that phase of ‘This is a new environment. These are new people. Where’s my place? Where do I fit in in this community?’” she said.

Nguyen-Phuong is a first-generation college student from Louisiana graduating with a Bachelor of Science double majoring in psychology and economics. She recounts an interaction at New Student Orientation that was pivotal to the rest of her time at Tulane. She was leaving a workshop hosted by the Center for Academic Equity when one of the program coordinators at the time, Gabriel Rodriguez — who is now a career coach with Newcomb-Tulane College Career Services — asked her a simple but important question: “How are you?”

That interaction inspired her to keep going.

“There are people on this campus who obviously care about me and think I belong here and think I can do this. So, if all these people believe in me, then I should believe in myself,” she reasoned.

The two years later, she served on the board of directors for New Student Orientation, helping pay it forward and plan orientation activities to assist new students in their transition to college life.

“I was pulled into finding my community and then asked myself how do I foster that sense of community on campus?” she said.

Nguyen-Phuong, who is Vietnamese-American, also became involved in the Tulane Vietnamese Student Association. During her four years, she served as a freshman representative, secretary, co-president and senior adviser of the association. In her roles, she was able to celebrate and share her heritage with the Tulane community. She said she has spent a lot of her time at Tulane reflecting on being a Vietnamese-American woman in New Orleans.

At the Phyllis M. Taylor Center for Design Thinking and Social Innovation, Nguyen-Phuong completed a yearlong Design Thinking student fellowship. She helped to create and lead workshops to share the language of design thinking with others in her community. Design thinking instilled a renewed sense of possibility in Nguyen-Phuong and helped her feel more comfortable facing failure.

“If this product doesn’t meet the objective, I can just scrap it. What’s the point of agonizing over the ‘perfect’ idea or the ‘perfect’ solution when those things are inevitably bound to change anyways,” she said.

Nguyen-Phuong also worked as a student research coordinator with Patrick Button, economics professor at the School of Liberal Arts. The most recent research she worked on with Button is examining sexual orientation discrimination in the mortgage lending market.

“Working with him has been awesome. He’s so supportive and encouraging, not only as a boss, but as a person,” she said.

After graduation, Nguyen-Phuong plans to move to Dallas to work in a management consulting role. After a few years, she plans to attend graduate school with a focus on public education, particularly the public education system in New Orleans.

During her time at Tulane, Nguyen-Phuong has learned to be her own self-advocate.

She has also learned, just like that interaction at her New Student Orientation, that it only takes one person to spark inspiration to persevere.

“I think it’s important, and it’s easier said than done, to push past rejection and keep trying, keep looking for that one person who will be like, ‘Yes, absolutely. I’m so excited to have you,’” she said. “There are those people on campus, but also in the world, who will be very enthusiastic to listen to what you have to say and want to work with you.”

Architecture student builds a future with leadership experience
From security guard to doctor, Class of 2022 student speaker proves that ‘anything is possible’
Graduate student gets last laugh with master’s degree from Tulane
Fourth-generation Tulanian was (almost) all business on campus
Just do it – Runsdorf Award winners embody the spirit of public service