Graduate student gets last laugh with master’s degree from Tulane 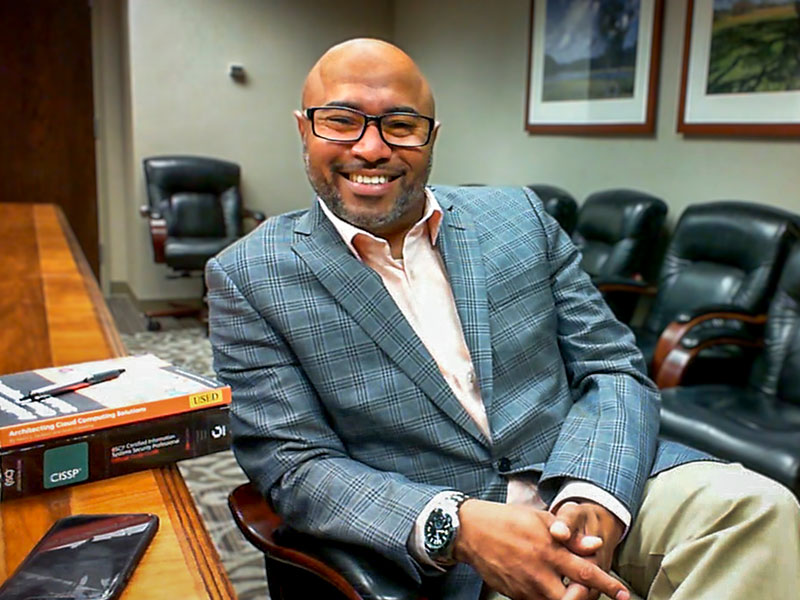 Xavier Calfee defied expectations when he enrolled in the School of Professional Advancement. Now he will earn a master's degree, as a member of Tulane 34.( Photo by Paula Burch-Celentano)

Xavier Calfee is a husband, father of three boys, a full-time instructor at the Richmond Technical Center in Richmond, Virginia, a U.S. Marine Corps veteran and vice president of Tulane’s new Student Veterans of America chapter. On Saturday, Calfee will add the title of Tulane graduate to the mix when he receives his master’s degree in Information Technology Management and graduate certificate in cybersecurity from Tulane’s School of Professional Advancement. A Virginia resident, Calfee earned his degree online and also received the prestigious Tulane 34 Award.

Calfee’s path to Tulane began many years ago as a high schooler in Newport News, Virginia. He was tasked by his school counselor to come up with his choice of colleges to attend. The following weekend, Calfee stumbled onto a televised Tulane football game and listened to the announcers talk up the university. He returned to school and informed his counselor he wanted to attend Tulane University. The counselor laughed him right out of her office, which became a defining moment in Calfee’s life.

“I did not have a lot of direction when I was in high school, and when the counselor gave me the assignment for college choices, I was lost,” said Calfee. “I initially went to Norfolk State for one year but was still trying to find the right path for me. In 1997, I caught another Tulane football game. Shaun King was Tulane’s quarterback. The broadcasters referred to Tulane as the ‘Harvard of the South.’ What stood out to me was they did not talk about his athleticism and football prowess. It was more about the institution he represented. I felt at that moment that it was ordained and fate. I had to get to Tulane.”

Calfee joined the Marine Corps and received the direction and discipline he desperately needed. He eventually found a program that led him into computer sciences. Following his discharge, Calfee went back to college, earning an associate degree and a bachelor’s degree. Along the way, he met his wife, Jennifer, a native of Lafayette, Louisiana, married, started a family and began his path toward fulfilling his dream of attending Tulane.

As for his high school counselor, the two have remained lifelong friends. Calfee recently reached out and let her know he was graduating from Tulane.

“Her mouth was on the floor, and she had a few colorfully placed words. She was just beside herself. We just hugged and ‘ugly’ cried. It was 20-plus years of an ‘I told you so’ moment that she let me have with no malice behind it. She was genuinely happy for me,” Calfee said.

Calfee plans to continue working in an information technology capacity but says he will not limit himself to just being a “knob turner.” He plans to further his education and eventually give back by teaching and mentoring others.

“Tulane is a special place, and I would scream (it) from the mountaintops. I felt that every instructor genuinely had my best interest at heart, and I have made lifelong friendships and felt welcomed at every venue. My love for Tulane will not go away,” Calfee said.