Since the spring of 2006, the NOLA Fund has been providing free, after-school technology classes to New Orleans area high school students. The best part: when students successfully complete the course, they receive a free laptop to take home and keep. More than 120 public school students have been taught computer skills and provided new laptops through the NOLA Fund technology program, a voluntary activity of Tulane students. 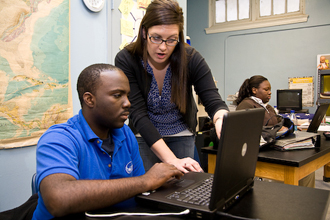 In partnership with New Orleans Outreach and the New Orleans Charter Science and Mathematics High School, the NOLA Fund works with students who do not currently own computers and provides each high school student with more than 30 hours of free computer instruction.

A report by the American Psychological Association indicates that underprivileged students who are able to use the Internet at home have higher grade point averages and stronger scores on standardized tests of reading achievement, according to Lander. Yet, only 45 percent of low-income families own a home computer and only 29 percent have a working Internet connection.

The NOLA Fund works solely with open-enrollment public and charter schools, serving students who do not currently own computers. Focusing on fundamental applications such as Microsoft Word, PowerPoint, FrontPage and Excel, each student gains a proficient understanding of computer applications required for success in both high school and college, Lander says. 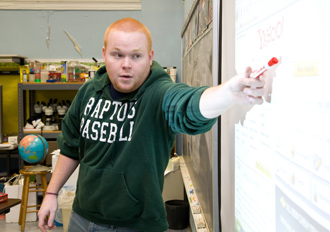 Teaching at the white board, Matthew Limback helps high school students understand computers and the Internet. Limback is a senior at Tulane and a volunteer with the NOLA Fund.

Lander inherited the program from her brother, Kevin Lander, and three of his friends  all Tulane students  who founded it. They began working 18-hour days the week after Hurricane Katrina hit New Orleans in August 2005, setting up a unique, nonprofit hurricane relief effort called NOLA Hurricane Fund.

The four took a semester off from college to travel across the country, visiting Tulane students at various universities and working with them on fund-raisers.

“They got an unbelievable response,” Denali Lander says. “When these four guys had this idea a week after Katrina, it was very grassroots. And it has become a significant project.”

Initially the organization facilitated rescue efforts by funding supplies for student emergency medical technicians serving immediately after the storm. Next, the organization focused on relief, sponsoring five families whose homes were destroyed by the storm and helping to remodel two schools that were struggling to reopen. By working closely with the families, Lander says that NOLA Fund organizers became aware of the need for computer literacy among public school students.

Now, with the four founders serving on the board of the nonprofit organization, NOLA Fund raises funds through the organization's website, a Facebook page and a listing on Network for Good.