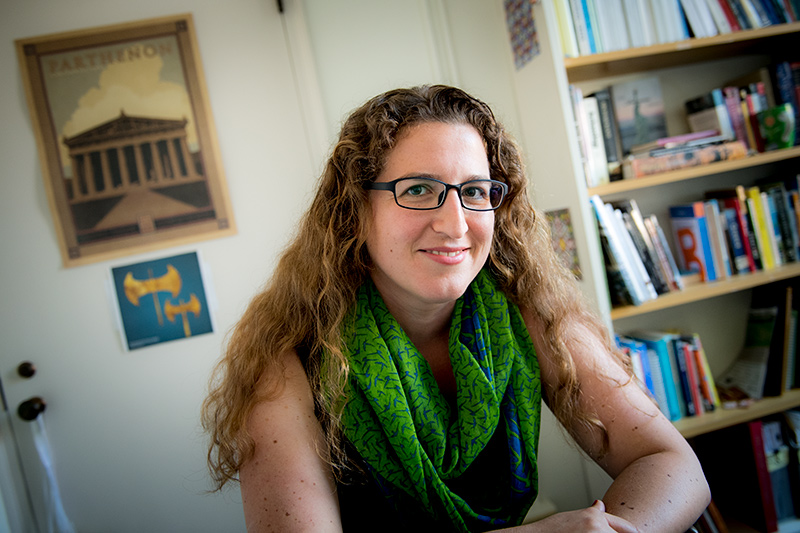 Emilia Oddo of the Tulane School of Liberal Arts recently returned from the Greek island of Crete, where she took up a research project on Bronze Age pottery that had been sitting in storage for decades. (Photograph by Paula Burch-Celentano)

Editor’s note: Read part one of this article here.

Tulane School of Liberal Arts assistant professor Emilia Oddo took on an unexpected role when the British School at Athens asked her to assume the mantle of the late archaeologist Arthur Evans, who excavated sites around the island of Crete in the 1920s.

Specifically, they asked her to study 19 boxes of Minoan pottery sherds from the House of the Frescoes near Crete’s Knossos Palace.

“Archaeology is often detective work when several clues build up to a reasonable scenario.”

“It was very exciting because I never worked on Evans’ material, and because he’s just like the godfather of Cretan archaeology,” said Oddo.

Evans only published preliminary work about the site. The boxes had been in storage for years.

If sorting a trove of Bronze Age pottery sounds complicated, Oddo and her team of undergraduate assistants were building on the archaeology practices of a different era. While Evans’ notes were detailed, pottery at that time was mostly used for dating. Once his team dated the material, they discarded sherds they didn’t need—possibly eliminating clues important to today’s archaeologists.

But the remaining sherds made up for it. “The material itself is amazing. It’s really good quality — elaborately decorated, spanning a few generations, some pots that I had never really dealt with,” Oddo said.

The House of the Frescoes may have been more significant than a household; the type and quality of its pottery, such as jugs with holes in the bottom (“rhyta”), aren’t consistent with everyday use. They may have had a role in rituals.

Oddo will use the current academic year to catalog the sherds based on approximate date, decoration and quantity until she can resume her fieldwork next year.

The pottery, architecture and other finds from the building will lead to potential truths about the House of the Frescoes. “It’s all about how you piece together all these elements and you present them — archaeology is often detective work when several clues build up to a reasonable scenario,” she said.

Oddo estimates that the project, up to publication, will take a few years to complete.

Like this story? Keep reading: Archaeological sciences course gears up for big year